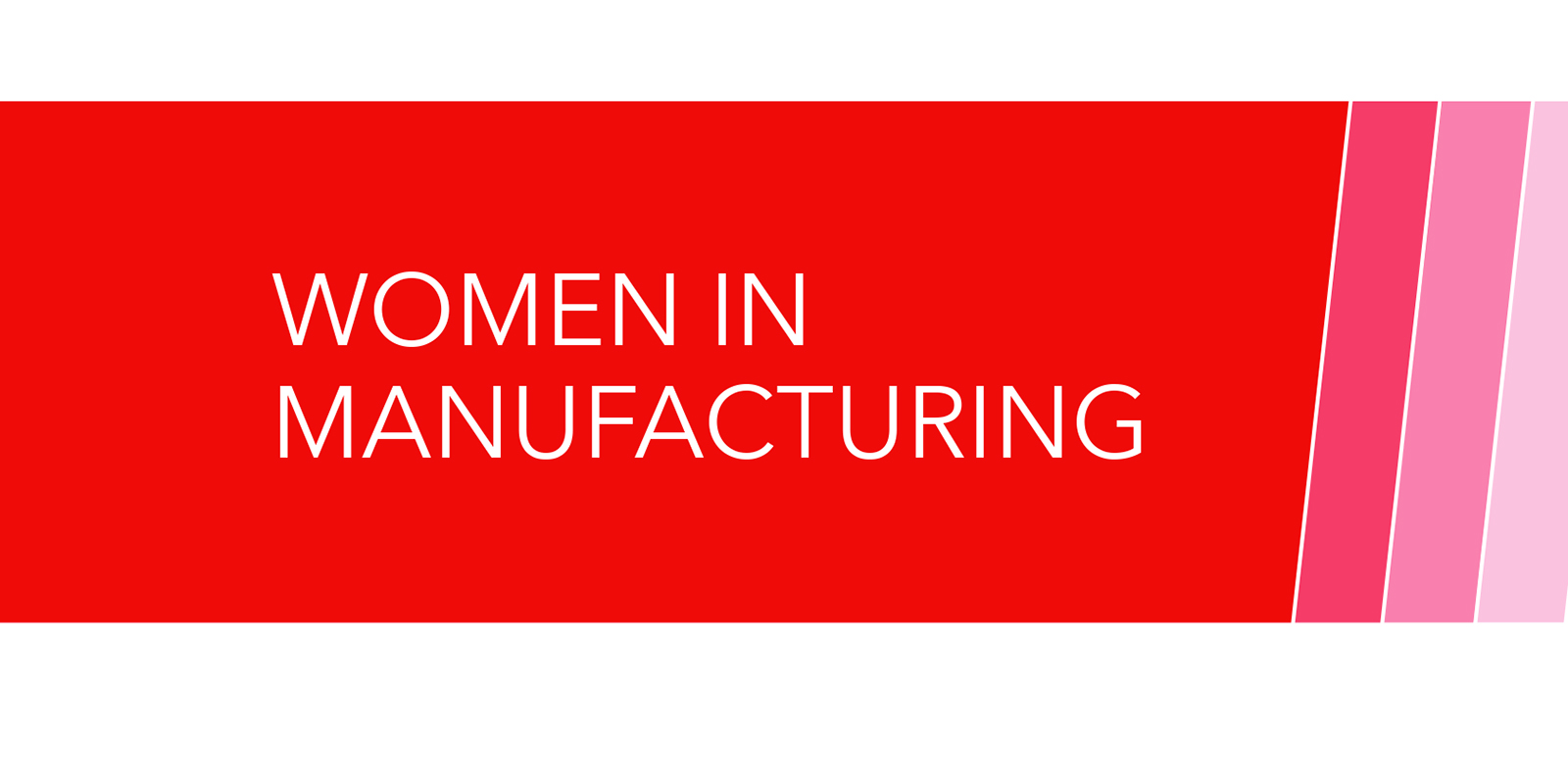 It’s time to make like manufacturers and actually change things through actions.

Where has all of this gotten us? I’ll tell you where. We have greater understanding; we’ve set the stage; and we’re ready to take the Women in Manufacturing initiative to the next level.

We have identified important actions around sharing stories to highlight female role models. We have provided employers with tools to help build an inclusive and diverse workplace culture. And we continue to raise awareness of the untapped potential that exists to build our future workforce by attracting and engaging females in Canadian manufacturing.

To validate if the initiative is moving in the right direction (I know…more talk), I asked a few people from various backgrounds and experiences to weigh in on what they see as some tangible next-step actions.

ALISON KIRKLAND (AK) is Director, Communications and Client Services for the Women’s Enterprise Centre of Manitoba

SARAH HARRIS (SH) is a student at the University of Manitoba pursuing her Bachelor of Engineering, and is a Co-Op Student at Orthopaedic Innovation Centre (OIC), a multidisciplinary facility for orthopaedic medical device design

SUSAN SULLIVAN (SS) is a Chartered Human Resource Professional with 20-plus years in the field, is Human Resource Manager at Controlled Environments Limited (Conviron), and is a participant in the WIM provincial working group in Manitoba

What would you suggest that needs to be done today to attract and retain more women into careers in manufacturing?

AK – Profile women who are successfully operating businesses in the broader manufacturing definition. Add to the traditional graphic representation of manufacturing that shows men wearing hard hats and steel-toed boots, to include women who are adding value to their products in different ways, which tend to be less industrial.

CH – Manufacturing may have a stigma of being male dominated, especially on the shop floor. This couldn’t be further from the truth.

Ironically what we find works best to combat this view is to ignore gender altogether; manufacturing doesn’t care about gender. What we need to do, as manufacturing employers, is focus on safety and environment for everyone. You can’t work on efficiencies if your employees don’t feel safe – whether that’s fall protection, lifting limits on weight and movement ranges, plant layout, or cleanliness.

In today’s environment we need
to look at all these things to have the best employees (which we do!) and to be competitive.

SH – When I graduated high school, my perception of careers was based totally on what I saw in society. What I did not realize was the way stereotypes had already influenced my decisions and options.  Although I was always a strong math and science student, when my mom suggested I apply to engineering, I initially dismissed the idea entirely, I was a creative girl!

Engineering is a combination of creativity, math, and problem solving. The response I received from many people when I shared that I applied for engineering was ‘you don’t seem like an engineer.’ Without exposure to successful women working in fields like manufacturing and engineering, much of the world, perhaps like me, was reluctant to embrace the non-typical engineer.

Since joining the faculty of engineering and working in the manufacturing industry, it has become very important to me to share my positive experiences with other young women.

The most powerful way to influence young people is to give them role models. Young women want and need to see other young women who are passionate about their work and thriving and flourishing in important careers.

One reason I hesitated to go into engineering and manufacturing was the perceived disconnect between being a creative female and my impression of a stereotypical engineer.

SS – We need to start early in educating young women in potential careers in manufacturing and change the image of manufacturing that they may have in their minds. Share stories and images on social media that highlight those roles and how things look different than they would have 20 years ago. Provide internships – short-term and long – to allow young women to experience and learn about a career path in manufacturing.

How has your perception of manufacturing changed since you have been actively engaged in the industry through your internship?

My internship workplace performs testing for biomedical devices. I had always been motivated to work in the medical field, but I had never made the connection between manufacturing and healthcare. The source of medical devices and supplies is vital to successful healthcare.

Aside from a new appreciation for the components that make-up manufacturing, I am excited by the new innovative technologies that are emerging. Additive manufacturing and increasingly more intelligent technologies mean that industry is becoming more complicated and diverse.

What are the challenges for female makers to understand that they are actually manufacturers in the broadest sense? How do we change this perception?

AK – The general perception is that manufacturing is a process that involves major equipment and industrial production lines where raw goods are transformed into finished products. It’s time to increase the awareness of the broader definition of manufacturing to illustrate that small changes or refinements made by hand are also manufacturing.

More emphasis is needed on the words producers are using to refer to the work that they do: ‘changers’ and ‘makers.’ These words also emphasize innovation and the change in the process of creation.

This broader definition should be shared; it will be the first step in changing perception. Additionally, ensure that women who are involved in the broader type of manufacturing have a seat at the board table for all manufacturing discussions.

What can we do to ensure women are engaged and valued?

SS – Flexibility with schedules would be a start. We offer that to office staff but not with production, and that may be eliminating a portion of our labour market right there.

Another idea would be providing discretionary or family time to allow for care of children, elderly relatives, and other family members.

Providing a career path and investing in training would also show that employers value all their employees, not just their female workforce.

There are definitely some common themes and encouragement to continue the initiative in a meaningful way.

Join me in engaging and inspiring our future workforce by providing education on the career paths in manufacturing. Work to provide a healthy workplace culture to attract and retain the best people for the jobs you have. Empower, support, and accelerate women to achieve personal and professional growth in your company.

Can you influence the change? Absolutely!

It’s time for us to stop talking the talk, and start walking the talk in our schools, our post-secondary institutions, our businesses, and our everyday life. We know what needs to be done, so let’s get doing it!

Carrie Schroeder is the Director of Operations for Canadian Manufacturers & Exporters (CME) in Manitoba, and is one of the driving forces behind CME’s Women in Manufacturing initiative. To learn more, visit womeninmanufacturing.ca.

Sometimes a fortuitous incident can spark a business idea. For Madeline Conn, president and majority owner of High Key Brewing Co., it was the distinct undertones in craft beer that led to a venture in Saskatchewan’s booming craft beer sector.

“In 2013 I went to Dallas, Texas for on-the-job-training, and was introduced to the craft beer scene,” says Conn. “The beer was so different with complex flavours I had not experienced before.”

Along with the opportunity to sample various styles of brews, Conn was drawn to the collaboration and culture of respect evident among the craft breweries. There was an excitement, a shared passion to produce small batches of specialty beer.

“I could tell the quality of the beer was key and not the quantity. The master brewers loved what they were producing. For them, it was a labour of love.”

The principles of co-operation, independent ownership, and a role in the development of the local economy resonated with Conn’s prairie upbringing. Her undergrad background and entrepreneurial creativity ignited under the name High Key Brewing Co., based in Saskatoon, where she was born and raised. Conn wanted the name to be original, reflect her passion for beer, and embody an energetic presence.

Conn’s business dream became real when, through a family connection, she met Daniel Rommens, a Saskatonian, who had returned home to pursue brewing beer as a career. Rommens left his industry job to become the head brewer and manager of brewery operations for High Key. Within a year, growth propelled the company to hire another brewer, Matthew Chevrier, also from Saskatoon.

Start-up of any business inevitably has obstacles. During Conn’s search for a commercial space, she learned city building codes for breweries restricted locations to heavy industrial areas, limiting options for a suitable and publicly accessible facility.

“Our location on Quebec Avenue offers space for production and the taproom,” says Conn. “Our initial marketing strategy had to change as we are a destination, without the benefit of foot traffic.”

On the plus side, in 2016 the Saskatchewan Liquor and Gaming Authority removed several barriers for craft beer manufacturers. Breweries could sell brews on site and distribute products directly to Saskatchewan retailers. The timing was perfect leading up to High Key’s official opening in April 2018.

Establishing a brewery is capital intensive. Conn acquired multiple entrepreneurial loans, combined with a share offering to family, friends and acquaintances, who have been major supporters of her enterprise from the beginning.

“Securing financing and finding investors was a bit daunting,” says Conn, “especially ensuring them that this business was a feasible venture.”

An MBA graduate of the University of Saskatchewan, Conn largely leaves brewhouse operations to Rommens and Chevrier while she concentrates on business activities. But all three often brainstorm new seasonal beers. As High Key founder, she noticed a gender bias at times when people mistakenly assumed her role in the business.

“Overall, I was received positively by suppliers and financial institutions,” says Conn. “When we first opened, people would often look to my dad, who is retired and helps to bartend, and ask him what got him into brewing. Or they would assume I was the brewer’s wife and there to support him.”

Brewmasters Rommens and Chevrier invest their hearts and souls into the recipes, using high-quality local ingredients and unique twists on traditional styles. Customers reap a bounty of bold flavour in a pink IPA made with hibiscus and rosehips or an Irish Red Ale conditioned with toasted oak and Jamaican rum.

“Standing in the middle of something you have created is very exciting,” says Conn. “There were many highs and some lows. Owning a business involves risk and uncertainty but the public enjoying our product and space is very rewarding.”

At Prairie Manufacturer Magazine, we believe manufacturing needs more women — in the corner office, in the technical trades, and on the shop floor. Manufacturers of all sizes, in all sectors, stand only to profit by employing a more diverse and representative workforce.

Prairie Manufacturer Magazine is a Premier Champion for the national Women in Manufacturing initiative. We invite you and your organization to join us in this important work.

Our Women in Manufacturing feature in our Winter 2019 issue will focus on Harnessing the Power of Influencers.

To learn more, or to join the movement, contact info@prairiemanfacturer.ca