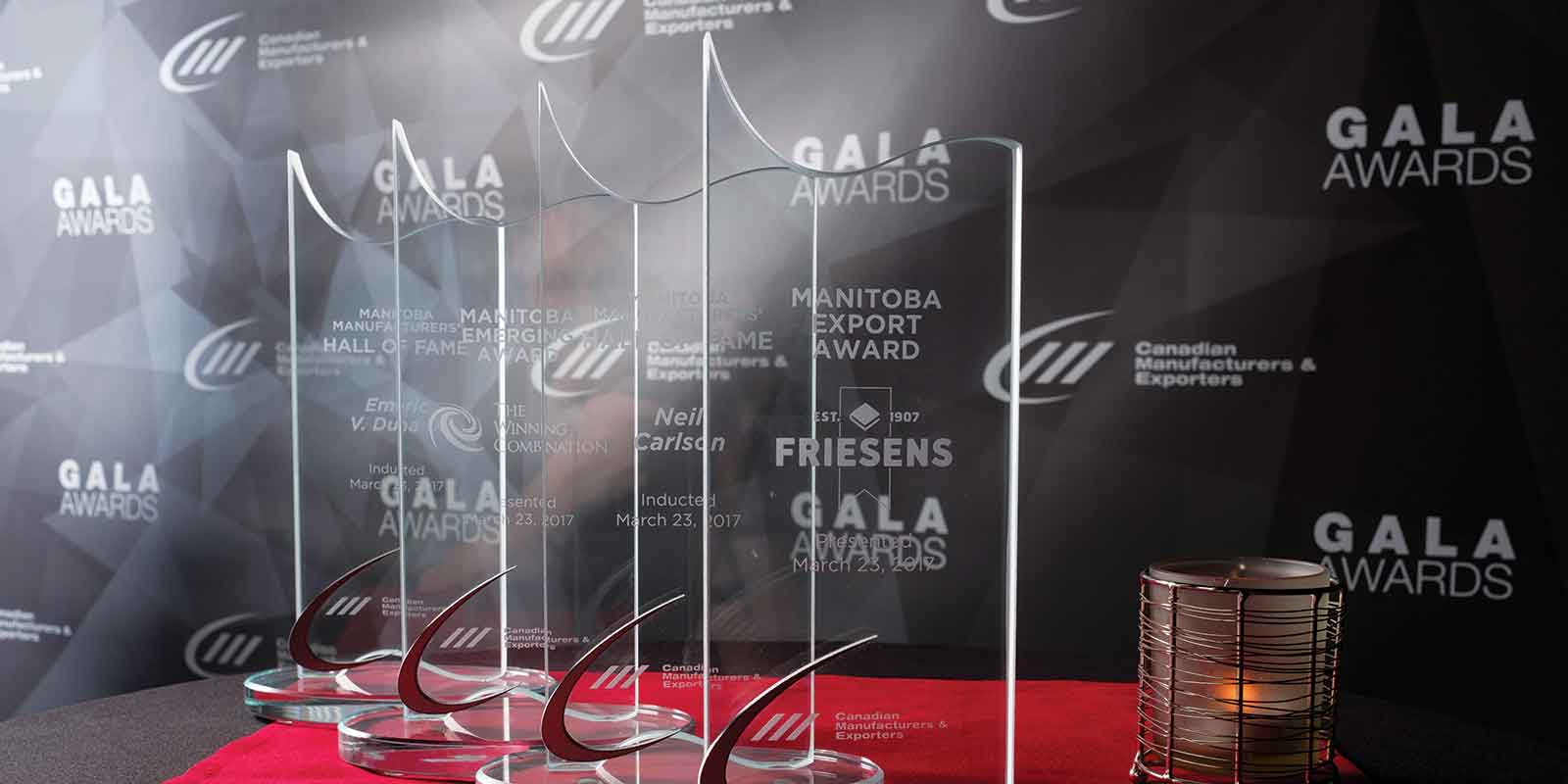 No Manitoba Manufacturing Week is complete without taking in the iconic Gala Awards Dinner.

More than 500 guests packed into the RBC Convention Centre to pay tribute to this year’s award winners:

With the support of his wife, Gwen, and his sister, Margaret, Emeric championed The Duha Group’s booming expansion from a printing press in the family home in Osborne Village, setting the stage for the company’s global success. Today, The Duha Group maintains a presence in nine countries across four continents.

Emeric, known as Rick and E.V. to friends and colleagues, had an eye to the future. With the proliferation of printers in the 1950s, he identified unique opportunities in a niche market: Specialized colour-merchandising tools. The company soon expanded from Winnipeg with a second location in Gimli, focusing on colour cards, fandecks, and colour systems.

Emeric’s dedication to the relentless pursuit of customer value, employee empowerment, and teamwork developed the framework to help The Duha Group grow and compete internationally.

Neil Carlson joined the family business, Carlson Decorating Co., in 1964. Under his leadership, the company grew from 35 employees and sales of $500,000 to a team of 350, with sales of more than $50 million, serving Winnipeg and North America across multiple industries.

During his 52-year leadership tenure, and with his wife, Marilyn, and children, Terri, Marni and Neil Jr., by his side, Neil took the company to become a market leader in Canada and the United States, with offices in Winnipeg; St. Cloud, Minnesota; and Anniston, Alabama.

Among other roles, he is a past chair of the Construction Labour Relations Council, past chair of the Trade Section of the Winnipeg Construction Association, and was awarded the Insignia of Commander of the Royal Order of the Polar Star Sweden. He also sits on the board of directors of the Swedish Council of America and, since 1980, has served as honourary consul of Sweden.

The Winning Combination (TWC) is a home-grown success. TWC innovates and manufactures two flagship product lines, Kaizen and Bodylogix — premium supplements for active lifestyles, which are distributed across Canada, the United States, and in select international markets.

Dedicated to developing natural products that empower consumers to lead healthy lives, TWC has experienced year-over-year double-digit growth for the past five years, contributing to and investing in the Manitoba economy by employing more than 100 employees at its five Winnipeg facilities.

With a vision to uphold the highest standards in quality and purity, TWC has become the dominant player in Canadian sports nutrition. It has raised industry standards by voluntarily opting to pursue NSF Certification, the world’s gold standard in independent testing, and was one of the first in sports nutrition to make the switch to naturally-derived ingredients.

Friesens is 100 per cent employee-owned and -operated. Based in Altona, Manitoba, the company employs nearly 600 people, which translates to roughly 14 per cent of the entire community.

Friesens has grown largely through steady export sales and strategic foresight. During the 2008 economic downturn, the company maintained a full salesforce in the United States, while many others cut back. Despite challenges, when the book publishing market finally began to rebound in 2014, Friesens was well-positioned for profitable growth. Today, the company exports 50 per cent of its products to the United States.