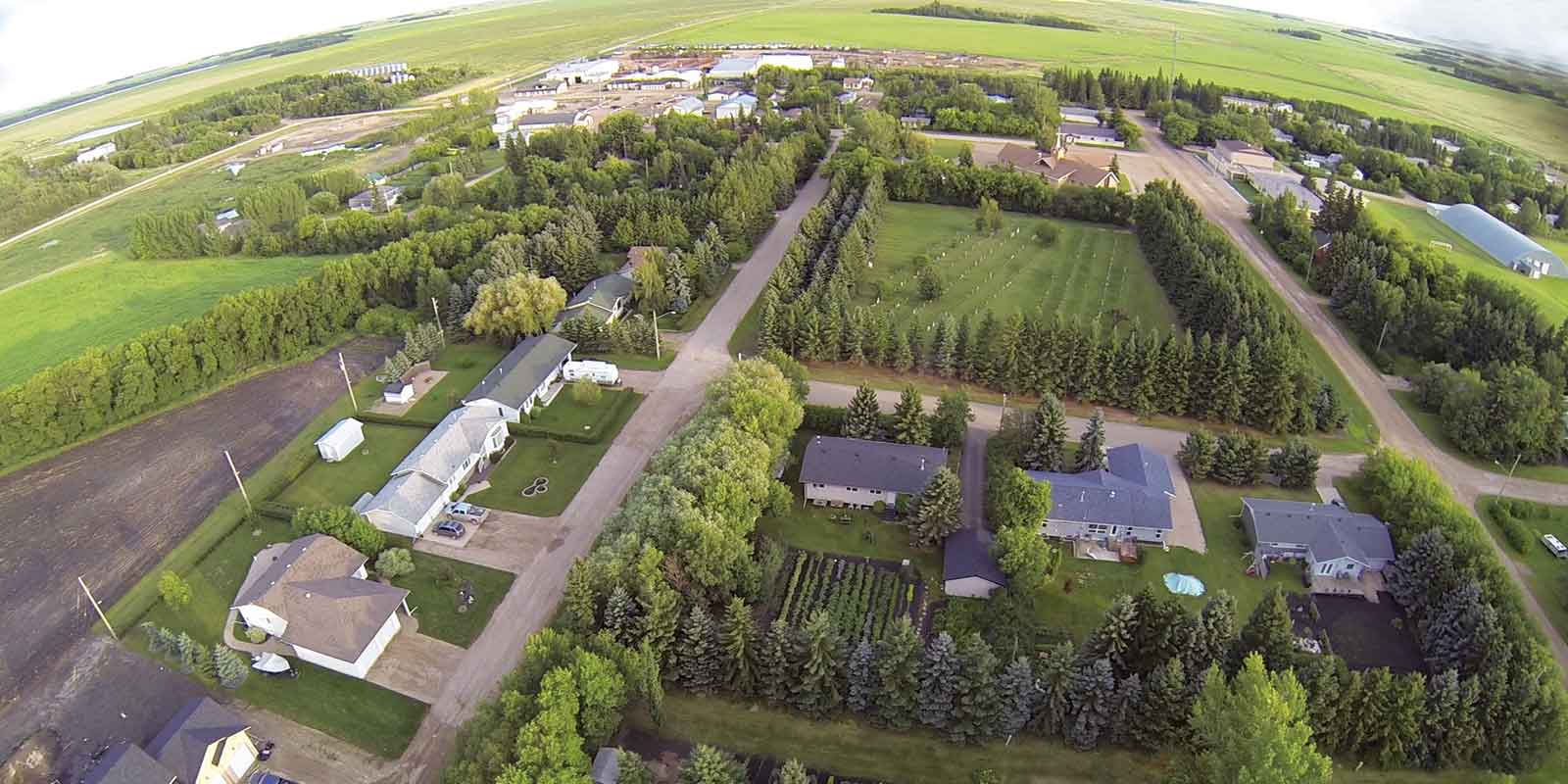 Meet three manufacturers overcoming the odds to grow their businesses, and communities, in rural Saskatchewan.

In Saskatchewan, nearly one-third of the manufacturing base is situated outside the two largest centres of Saskatoon and Regina. Some of these rural enterprises employ staff complements half, equivalent to, or even double the size of the communities they operate in. And many are punching well above their weight class on the world stage.

Saskatchewan Business Hall of Fame inductee, Doepker Industries, traces its roots back to the northern United States, where the Doepker brothers emigrated from before settling in the small agricultural community of Annaheim, Saskatchewan, 125 kilometres east of Saskatoon.

Following the completion of World War II, the brothers studied welding and mechanics, and decided to open a repair shop to serve local farmers. They quickly built a reputation as entrepreneurs who did the right thing and helped their neighbours in need. Growth was inevitable.

It’s a familiar storyline on the Prairies.

Today, Doepker Industries is a leader in the production of trailers for the agricultural, forestry, construction, and industrial sectors, providing 150 jobs out of its head office in Annaheim, current population: 210.

But the company knows small-town life isn’t for everyone. So, they’ve adapted. To meet the demands of a growing business, and to accommodate a variety of employee lifestyle preferences, Doepker Industries has established facilitates in the cities of Moose Jaw and Saskatoon. They’ve invested heavily in communications infrastructure as well, from virtual private networks to video conferencing capability, that enables support staff to work remotely.

According to President & CEO Evan Doepker, these are the types of unique challenges that rural manufacturers must surmount.

“The largest disadvantage for us is time. Overnight delivery isn’t really an option when shipping something from suppliers in Eastern Canada or the United States,” he explains. “That’s why we were driven to focus on inventory management and planning systems, which, in turn, has developed into a competitive advantage. We’ve been able to overcome the timing issue and respond to a dynamic demand environment.”

Dynamic could also be used to describe the relationship between the company and the community.

Given the relatively remote setting, the lines between work life and family life are not always distinct. Children of employees play on the same sports teams, go to school together, and attend each other’s birthday parties, while the employees themselves are often in the same community clubs, church groups, and volunteer associations.

“Take the volunteer fire department. It has a large number of people that work at the company, and their familiarity with what we do would help immensely in an emergency,” he says. “Company resources are used to support community functions — photocopiers, office supplies, meeting rooms, vehicles, snow clearing equipment — and community efforts go to help the company.”

The evolution of the business has had a profound impact on the composition of the village, too.

Despite aggressive investments in advertising and recruitment over the years, labour mobility in Saskatchewan remains a significant economic hurdle. The province has not been immune to the continental trend in urbanization; and that has hampered the ability of rural manufacturers to fill every type of position.

One of the more creative efforts to subvert the struggle in recent memory came courtesy of AGI Envirotank in the west-central Saskatchewan town of Biggar. In 2014, founder Dave Burton ran a job posting with only two requirements: Applicants had to live in Biggar or the surrounding community, and they needed to qualify to play for the local senior hockey team. The campaign yielded about 10 new hires and was the subject of a television profile aired on Hockey Night in Canada.

For Doepker, immigration — not hockey — has been the saving grace. It began as far back as the 1970s, when Annaheim saw an influx of families from Vietnam. In the early 2000s, South Africa seemed to be the spring of talent. And, lately, people from the Philippines, Tunisia, and Mauritius have been making their way to Saskatchewan in droves.

“Various community and church groups organize to help with the integration process of the entire family — getting housing ready, necessities like winter clothing and cookware, and food hampers to get started,” says Doepker. “Not all of these people have remained part of the Doepker team; however, many have stayed in the community, and we still see that as a win.”

Two-and-a-half hours away, located halfway between Saskatoon and Regina on the shores of Lake Diefenbaker, sits another unlikely manufacturing town, Elbow.

In the 1990s, the community of 300-plus strove to diversify from its reliance on agriculture and seasonal tourism, and successfully wooed a small technology firm away from Saskatoon. A facility was built and business was good. Several years later, the company was at a crossroads, and that is when the community stepped in once again.

Twenty-four local farmers, company employees, and ordinary citizens pooled their money to purchase the company. The new proprietors wanted to reflect the community ownership spirit, so they renamed the company Commutron — a combination of community and electronics.

More than two decades later, Commutron Industries continues to manufacture custom printed circuit boards and electronic sub-assemblies for the energy, transportation, agriculture, and communication sectors. Half of the original 24 investors are still involved, and seven sit on the board of directors. At any given time, there are between 17-26 staff members.

Not all of them, though, are native to the area, including Robert Leonardo, who moved from Ontario in 2015 to assume the reigns as general manager.

Elbow is definitely no Toronto — yet Leonardo maintains that isn’t necessarily a detriment in an industry more synonymous with Shanghai than Saskatchewan.

“Low overhead, low taxes all lead to our prices being very competitive with both domestic and offshore companies,” he says. “Close proximity to our customers means we can deliver quickly, and our commitment to lean methodology and best practices result in top quality for our customers.”

Despite being one of the largest employers around, Leonardo has been surprised by how many locals are unaware of what Commutron does in their own backyard. An open house, held in celebration of the manufacturer’s 20th anniversary has helped change that, but it’s a constant reminder of how the community and company must work hand-in-hand.

“We’d like to get involved with the school system, maybe by providing a space for training or contributing to the curriculum in some way,” says Leonardo. “We don’t forget our roots. Whether it’s raising funds for a local event, providing input to the school division, or face-painting kids for Canada 150 celebrations, it’s important to give back for the support the community has shown us.”

When Pegg, the general manager of Honey Bee Manufacturing, drives down the grid roads in the southwest corner of the province, he can’t help but smile at the company’s iconic yellow and black swathers and combine headers at work in the fields.

“To see our neighbours buying and using our products gives us a great sense of pride,” he exclaims. “It shows how much our community supports the business.”

In 1979, brothers Greg and Glenn Honey needed a new tractor for their expanded farming operation. So, what’s an entrepreneurial Prairie farmer to do? Build one, of course.

And a rodweeder. Then a swather.

Neighbours nearby liked what they saw, and, soon, the demand for their equipment led to the Honeys setting up production in their farmyard quonset.

Within a decade, demand outgrew capacity. The family picked up stakes and moved production 30 kilometres down the road to the Village of Frontier, taking over a facility previously occupied by Friggstad and Flexicoil. Since then, the site has undergone countless renovations and additions, expanding to 100,000 square feet and dominating the country landscape.

“The more we can do in-house the better,” says Pegg. “Our header reels used to be brought in by two different suppliers from the United States. The freight costs for these items were extremely high. We needed solutions and the answer was vertical integration.”

Honey Bee’s research and development team got to work. The result was a world-class reel cut, drilled, welded, blasted, painted, and assembled right in Frontier — a better product and greater level of value-added work performed internally.

The key to making it all happen, as with any business, adds Pegg, is good people. Virtually the entire Honey Bee workforce is from within 70 kilometres of the plant, and several employees have been with the company north of 30 years.

“We don’t desire to move anywhere else. We are committed to this place and these people,” avows Pegg. “This is a place where people can fulfill their dreams, professionally and personally. People wanting the simple life have a home here. The cost for a modest house in the city can build the house of your dreams in our community.

“And when you are an international company like Honey Bee, active in 29 countries, there are opportunities to go anywhere in the world.”