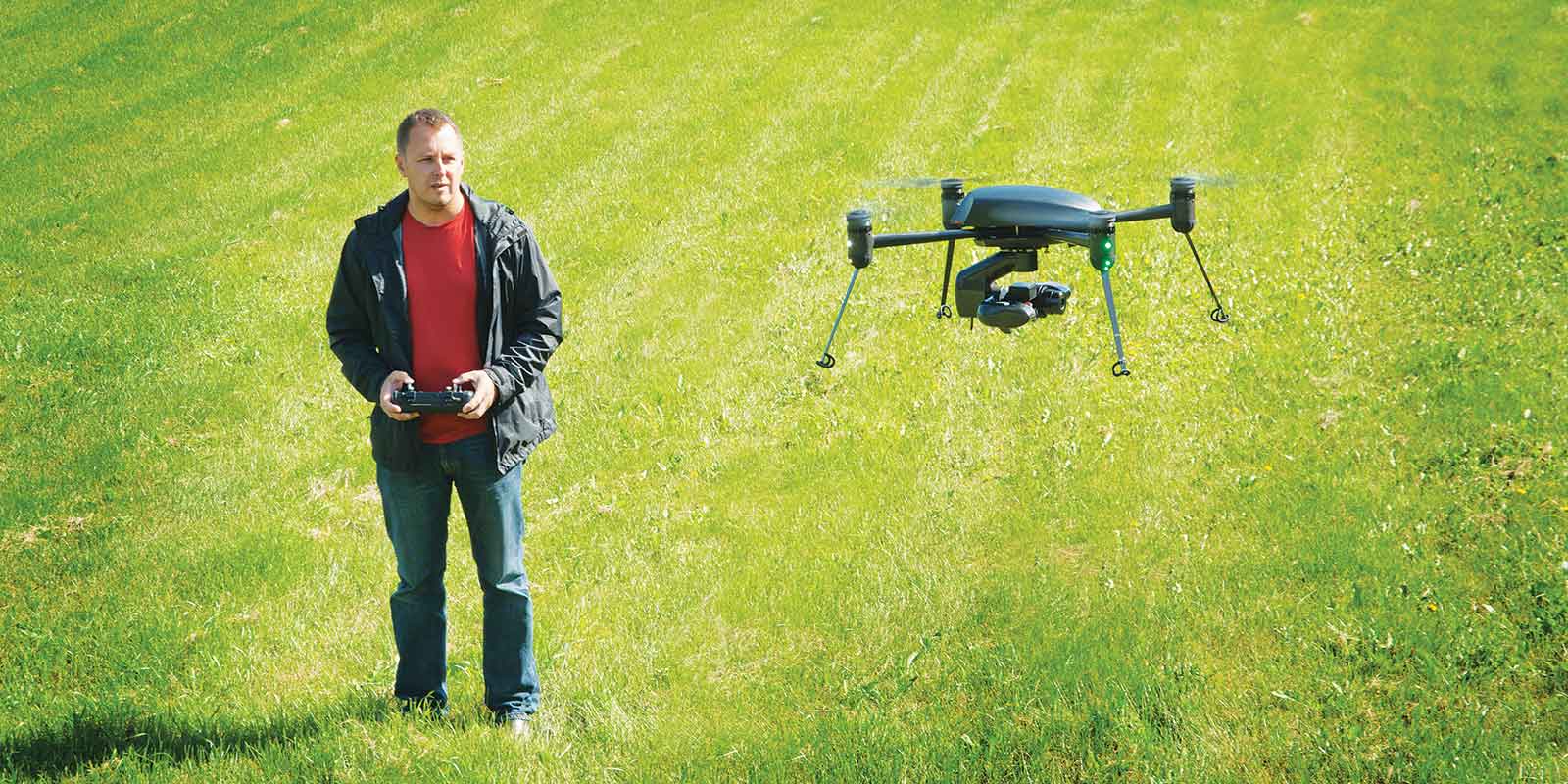 Flying has always inspired the imagination.

It took imagination, after all, to conceive that flying was first possible for humans. But once we took flight, we were able to look back on where we had originated with awe.

The ability to gaze down upon our world offered us a new means to consider how we live, work, and play. That bird’s eye view allowed us to gather new information and evoke fresh perspectives.

We then invented new ways of capturing and building upon that vista through the use of cameras and other imaging equipment. And then we eliminated the need for us humans to climb into the cockpit altogether.

Whatever you call them — drones, unmanned air vehicles (UAVs), remote piloted aircraft systems — they have given way to a new industry of opportunity, and have inspired imaginations yet again.

Agriculture, construction, mining — sectors woven through every facet of our economy are now scrambling to understand the capabilities and limitations of the technology, and what it means for the future of how businesses, and governments, operate.

Just a handful of companies in Canada consider themselves manufacturers of this technology, with a few others self-classifying as developers.

Ben Miller works for one of those that considers itself a true manufacturer. But that wasn’t where he was introduced to the world of UAVs. Miller initially became intrigued with the concept while working with the Mesa County Sherriff’s Office in Grand Junction, Colorado.

There, he experimented with products from several pioneering enterprises, including Draganfly Innovations, a small manufacturer some 1,400-plus-kilometres north, in Saskatoon, Saskatchewan. During his tenure, Miller helped develop America’s first operational program using UAVs at a state or local level of law enforcement.

“We tried stuff and left the stuff that didn’t work like [the manufacturers] said it would, or if it just wasn’t a good fit,” recalls Miller. “Draganfly is really the company and the technology that survived.”

The firm made international headlines in 2013 when its UAV-propelled infrared technology helped Saskatchewan RCMP locate a man injured and lost after his vehicle rolled into the ditch.

The man suffered a head injury in the accident and, disoriented, wandered away in the snow. He was found curled up next to a tree, unresponsive, but was later taken to hospital and released the same day.

For law enforcement, UAVs add another layer of capability.

Take, for instance, needing to gain an aerial view of a crime scene. Previously, the use of a manned helicopter had the potential to destroy the integrity of the scene due to the power of its rotors. A smaller, more versatile UAV, on the other hand, keeps the scene intact, while documenting information that is spatially accurate.

It is more cost effective — and, arguably, safer — than putting people in the sky as well.

“UAVs brought on the democratization of aviation,” says Miller, who now works in sales and business development for Draganfly. “They have disrupted the economics of aviation.”

But Draganfly alone has extended its reach well beyond the realm of public safety. Aerial photography, industrial inspections, and environmental research are only a handful of applications it serves daily.

Opening the technology up for civilian use, adds Miller, helps reassure the public that it has nothing to fear from UAVs.

“It’s not scary,” he says. “I can tell you that, in eight years of operating UAVs in the law enforcement space, I’ve never done anything questionable from a privacy perspective [or] from an ethical perspective.”

While some remain trepid, Doug Hanna, chief technical officer with the Alberta-based Canadian Centre for Unmanned Vehicle Systems, points out UAV technology used by the military today is aimed at protecting, not infringing on, what we hold dear.

Through his work with the Canadian Department of Defence, Hanna notes that some UAVs have helped detect improvised explosive devices, while others are able to pinpoint chemical and biological weapons.

“Almost always, the defence applications lead out — just because, at the early development stage of new technology, those advancements are expensive,” he explains. “That’s why we see the U.S. has led this globally, hands down.”

But Canada is building a thriving industry of its own. In the late 1980s, CFB Suffield — near Medicine Hat — drew widespread attention from the private sector for its research into the use of robotics, which has resulted in a spill-over effect with UAVs.

Hanna also credits the province’s position as a global agricultural hub for the noteworthy attention.

The farming industry is leading civil applications for UAVs. Monitoring crops for irrigation is just one possibility; however, at the moment, it can only be done on a small scale.

Currently, those operating UAVs must comply with the terms of their Special Operations Certificate issued by Transport Canada. That includes keeping aircraft within the Visual Line of Sight — equivalent to roughly 160 acres, a fraction of the modern Western Canadian farm.

To fly beyond these boundaries, Hanna says, the technology must be further advanced, integrating detection systems that allow UAVs to identify and safely respond to other aircraft at top speeds. Then, regulations will need to be updated.

Hanna recognizes, though, that not all technology must precede regulation. On the contrary, he would be one party advocating a flip to the approach, believing that once the proper regulations are in place, industry will respond and innovate accordingly.

“We talk to customers all the time who say, ‘Hey, I’m thinking it’s great, but I definitely don’t want to make the investment until the [proper] rules are in place,” he explains. “[They] don’t like the idea of going through an elongated permission process.”

South of the border, lawmakers are making headway.

Transport Canada followed suit with a similar commitment, choosing to focus on systems 25 kilograms or less operating within the Visual Line of Sight.

Miller contends that additional applications for UAVs will be discovered as regulations make more people comfortable using them. But, he suggests, there is a limit.

“You have to be a pragmatic technologist as an ethos. A lot of times, in early industries, especially technology industries like this, you see people saying the drone is the solution to everything.”

Hanna, meanwhile, believes roughly 80 per cent of the applications for the technology have already been identified; yet, not all those applications have the maturity or regulatory framework to be successful.

But, as the Pareto principle dictates, the remaining 20 per cent will help the industry soar to new heights. We are limited, still, only by our imagination.