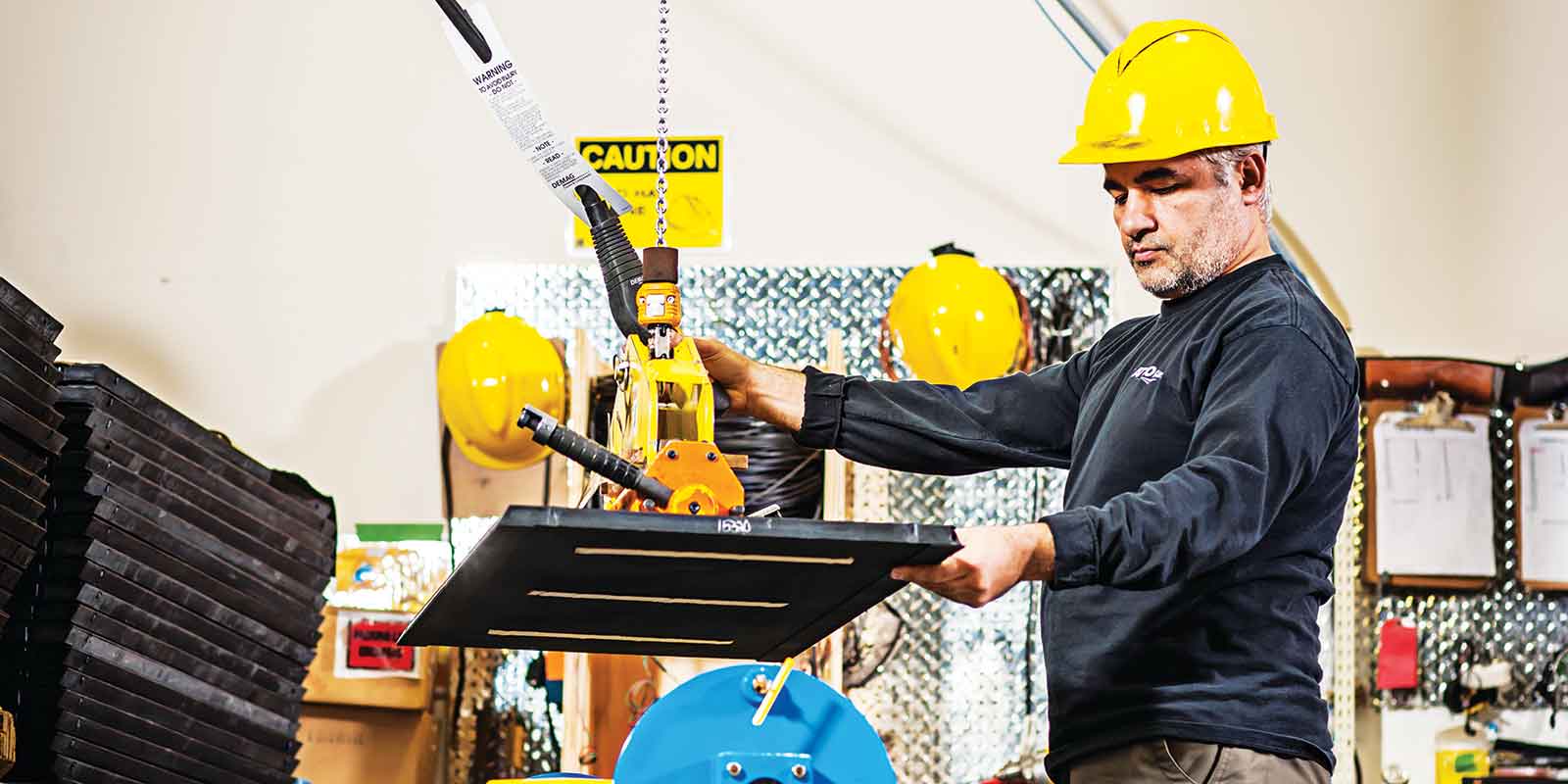 Three years ago, the management team at Degelman Industries knew something had to change.

The Regina-based manufacturer of farm equipment opened its doors in 1963, eventually moving into an 11,000-square-foot plant three years later. In the decades that followed, the company expanded its product line to include livestock and tillage equipment, land rollers, dozer blades, and other industrial goods, growing its facility to 160,000 square feet, with 300 employees.

Business was booming — but they weren’t meeting their deadlines.

“In the fall of 2013, we were in rough shape,” recalls operations manager Justin Kleckner. “We couldn’t supply our customers with accurate delivery times. We had trouble capturing the cost variances. We weren’t as efficient as we could be. Priorities were constantly changing, and demand was as well. It hit a point where we decided we couldn’t do it anymore.”

Degelman, which had flirted with lean manufacturing implementation 13 years earlier, knew it was time to give it another try; so management brought in some help from the outside.

“The first thing we did was run a small kaizen event surrounding lead times,” says Kleckner. “From there, we created an action plan, and went from telling our customers it was a six-week delivery time, which we often didn’t hit, to consistently delivering on-time within only a couple weeks.”

The next step was to create a new communications plan, better connecting the sales team to the production department, and vice versa.

“Since then, we’ve been able to reduce our inventory and keep deliveries to exactly when the customer wants the product. Currently, we’re holding onto 30 per cent less dozer inventory than we were, yet we’re delivering to the customer within a week.”

It has been a similar story at International Road Dynamics (IRD) in Saskatoon. A publicly-traded manufacturer and integrator of highway traffic management and intelligent transportation systems, IRD had also attempted to ‘go lean’ in the mid-2000s, with little success.

But as the company experienced unprecedented global growth, and leadership eyed doubling sales in a five-year window, the question could no longer be ignored: How is it possible to double sales without doubling staff?

Lean was back in.

“We had a lot of our people trained with introductory lean principles back in 2005-07,” says Trevor O’Byrne, the company’s manufacturing services manager. “So that’s where we started again. It began purposefully slow and small, because when you venture out to change a culture, you can’t just do it overnight.”

Like many companies entering — or picking up on — their lean journey, IRD began by implementing 5S, with the full backing of senior management. It was a key initial decision.

“You have to get rid of the garbage before you can clean up your processes,” he explains. “If you’re constantly tripping over things, or looking for equipment, it’s not doing you any good. And if you’re always walking across the shop to get the tool, you’re losing a lot of valuable time.”

Lean is also visual, adds O’Byrne. At IRD, all systems, standards, and work instructions are visible to staff; schedules are posted to encourage accountability; and the entire production floor can identify where inventory is moving along the process.

While there is much talk about lean tools, IRD has embraced the notion that true lean excellence starts and ends with the people.

“The bigger picture is the culture and leadership. You need to engage all of your employees. Ultimately, we had to look at ourselves first: How we manage our people, and what we want to get out of them. Part of that goes back to being visual — that your people understand the importance of their work, how it’s contributing to the business, and how it’s helping society.”

Dave Cohen, vice president of operations with IRD, agrees, and points to the internal champions that have sprung up as proof.

“We have the naysayers on-board now, wondering how they ever lived without lean,” he says. “I believe we have a happier workplace, for sure. Even though we have a long way to go, we’re certainly a few good steps down the road, which is further than we’ve ever been.”

A driving force behind the resurgence of lean in Saskatchewan manufacturing is Darryl Minty, the executive director of productivity and innovation for Canadian Manufacturers & Exporters (CME) in the province.

Prior to joining CME in 2014, Minty spent more than 25 years on the manufacturing frontline. He vividly remembers one company he worked for, trying and failing to adopt lean in the 1990s. It wasn’t until ownership mandated the application in 2007 that it was taken seriously; and, by 2010, Minty couldn’t believe the progress.

“When we brought in lean, like a lot of Prairie manufacturers, we were pretty darn good already. We had a very good product. We had good people. We had good processes. And, yet, if you took a step back and looked at our scorecard — at things like on-time delivery, health and safety, and quality — we were challenged.

“Lean helped us cut through that.”

Today, Minty shares his experiences with other manufacturers through the CME-administered Saskatchewan Manufacturing Centre of Excellence — a government-funded initiative encompassing lean training and mentorship.

Since launching the project, Minty and his team have built a 24-member lean consortium, and have graduated more than 350 students through lean 101, yellow belt, green belt, and black belt certification courses.

Degelman’s Kleckner and IRD’s O’Byrne were both graduates of the first-ever black belt class.

“It’s amazing how, when you go through the training process, you see things in your everyday life that can be more efficient,” notes Kleckner. “There’s a place for lean in every industry.”

The gains at Degelman, meanwhile, have been indisputable.

“We’re way further ahead than I ever thought we would be. We’re getting more product out the door with less effort, people are more comfortable, and the shop is in the best condition it has been in.”