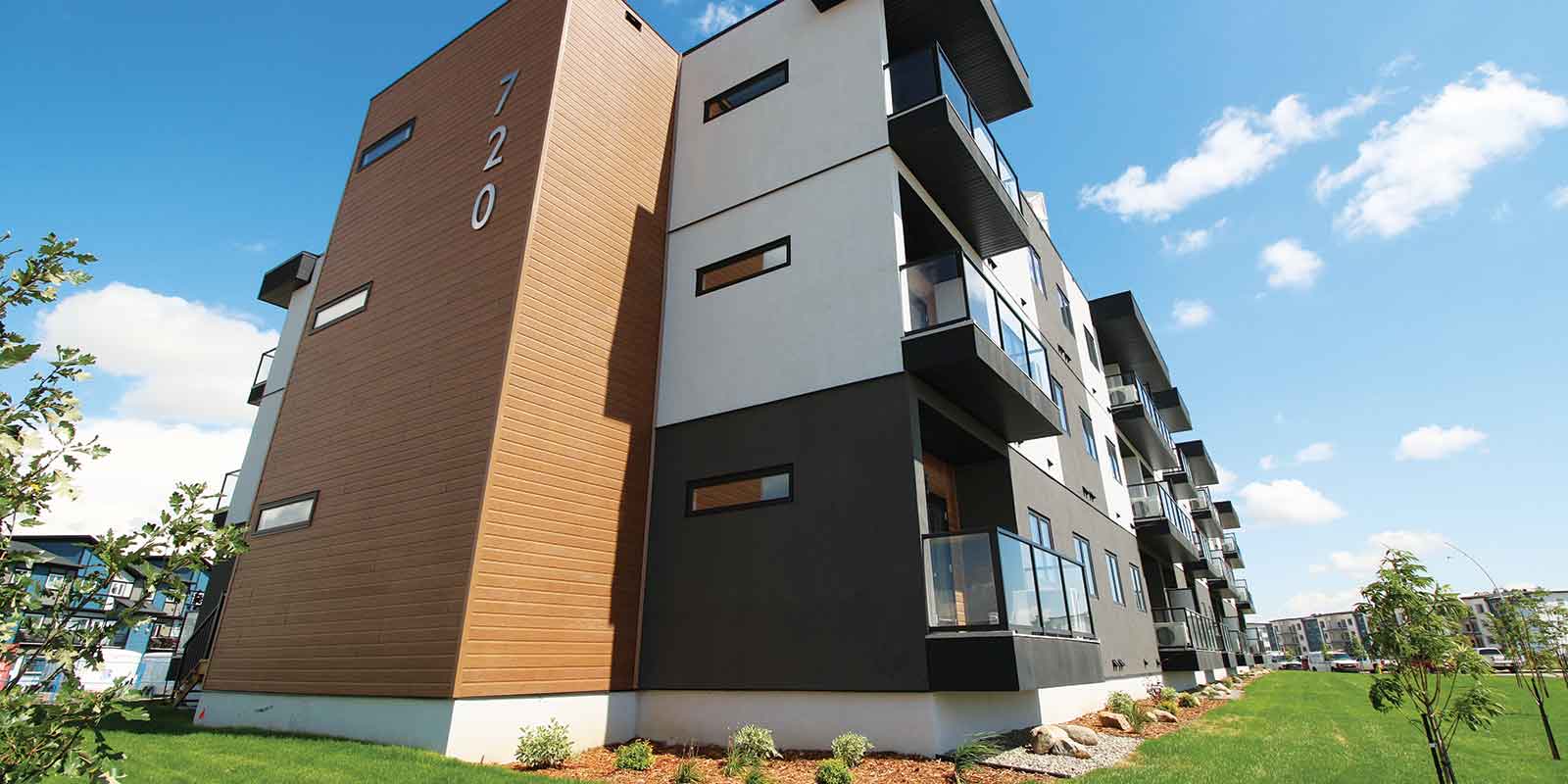 Sometimes, it’s all in a name.

When Canada’s housing market began to heat up in the mid-2000s, and the dream of home ownership inched further and further out of the reach of many consumers, the term affordable housing became more than just a price category — almost overnight, it transformed into a call to action for policymakers and builders alike.

It was a dilemma that had reached new heights, and one that required out-of-the-box solutions.

Co-founders Alex Miller and Tyler Mathies began their construction careers like many young entrepreneurs in the industry — by flipping homes. But, soon, a rather uncharacteristic opportunity presented itself that would change their business forever.

Against the backdrop of Saskatchewan’s economic heyday, the Saskatoon airport had started to attract unprecedented volumes of travellers. With the boom came the need to better develop nearby commercial opportunities, including a parcel of land just south of the airport, in the city’s tired McNab Park neighbourhood.

To make way for a slate of new hotels, a cluster of wartime barracks were put on the market for pennies on the dollar. The catch? They needed to be moved.

Miller and Mathies were up for the challenge. A new community was selected, new foundations were poured, and the buildings were relocated. After thorough renovations, the units were back on the market, completing the transition from dilapidated accommodations to comfortable, quality homes.

It also provoked an interesting question: How could they use that concept — a foundation there one day, a dwelling the next — and build more affordably, with quicker turnarounds and superior craftsmanship?

The answer was only 830 kilometres away, next door in Winkler, Manitoba.

“We ended up touring 19 facilities in Canada and the northwestern United States that specialized in modular construction,” recalls Miller. “Grandeur [Housing Ltd.] in Winkler was absolutely number one.”

Eight years later, Innovative Residential and Grandeur have the system down to a science.

Once land is purchased and designs are completed, Grandeur builds entire modules from floor to ceiling, ranging in size from 700 to 1,500 square feet. Electrical and plumbing hook-ups are positioned, interior fixtures are installed, and — as they say — ‘even the kitchen sink’ is dropped into place. The entire process lasts only five weeks.

The modules are then shipped to site and craned into position. It takes a single worker eight hours to finalize setup, which includes connecting all necessary utility hook-ups. Finally, a roof is built on top of the modules.

From start to finish, construction time is cut by more than half over traditional building practices.

“Once you have a model, the question is how you make it more efficient,” explains Miller, who is educated as an engineer. “If you are going to make a repetitive product, the modular approach helps to optimize the process. It takes the variable of weather out of it. It addresses a ton of safety issues. Ultimately, it has positioned our business to be scalable.”

Chris Guérette, CEO of the Saskatoon and Region Home Builders’ Association, says Miller’s theory has been proven true by the popularity of Innovative Residential in the marketplace.

“It’s a company living up to its name by doing things differently — and it’s working,” she says. “Even in an environment where a considerable amount of multi-family housing has been recently built, they’re selling well because it’s an attractive option and they are adding to the diversity of choice.”

For Miller, the factory-based methodology is equal parts efficiency and reliability.

In a standard build, most local jurisdictions require four or five separate inspections. By comparison, at Grandeur, the quality assurance protocol translates into between 1,200 and 1,500 quality checkpoints per module.

“It’s how a manufacturing factory is supposed to work. There are no surprises. You know what is behind your walls. Nobody drills holes on-site. Everything is done prior to assembly. It’s the only way to build.”

As of Spring 2016, Innovative Residential had 670 homes that had been lived in for more than a year — all entry-level townhomes or apartment-style condominiums. But Miller’s most satisfying statistic: Zero written complaints — a proverbial ‘flying pig’ in much of the home building sector.

“We’re a young business that cares about doing the right thing,” he iterates. “We won’t compromise on the things that are important. There are a lot of ways to build a home and, when I look at building in the factory, it’s impossible to site-replicate that. You can’t beat it.”

The business results tell the same story. The company is a recurring tenant on the Profit 500 list, with annual sales of roughly $35 million. In addition, they’ve received 30 local and national industry awards, including recognition from the Canada Mortgage and Housing Corporation.

Modular construction is, by no means, entirely new. Grandeur, which has been in operation for 40 years, has built close to 1,500 modules for Innovative Residential alone. Today, the company occupies 200,000 square feet of indoor production space and averages 300 full-time employees.

“Our homes are really no different in the fact they are still homes,” explains Jeff Enns, director of sales and marketing at Grandeur. “The only difference is that we build them in a factory setting, which makes us extremely consistent in what we do. It’s a controlled climate, so the same amount of work and expertise is going in at minus 30 degrees as when it’s plus 30 outside.”

Grandeur welcomes the label of manufacturer with open arms; but Enns is quick to mention that the word factory is often misrepresented, associated with a single-point product or an assembly line allowing for little change.

Like many of North America’s premier manufacturers, however, customization is baked into their success. Grandeur produces roughly 400,000 square feet of finished space each year, from custom-built homes and apartment complexes to RCMP detachments and day care centres.

“We are still able to surpass the demands of any architect, engineer, local building authority, or building code,” adds Enns. “We’ve been around four decades because of our commitment to quality and customer service.

“If you take care of those two things, and your staff, manufacturers can sell anything more than once.”