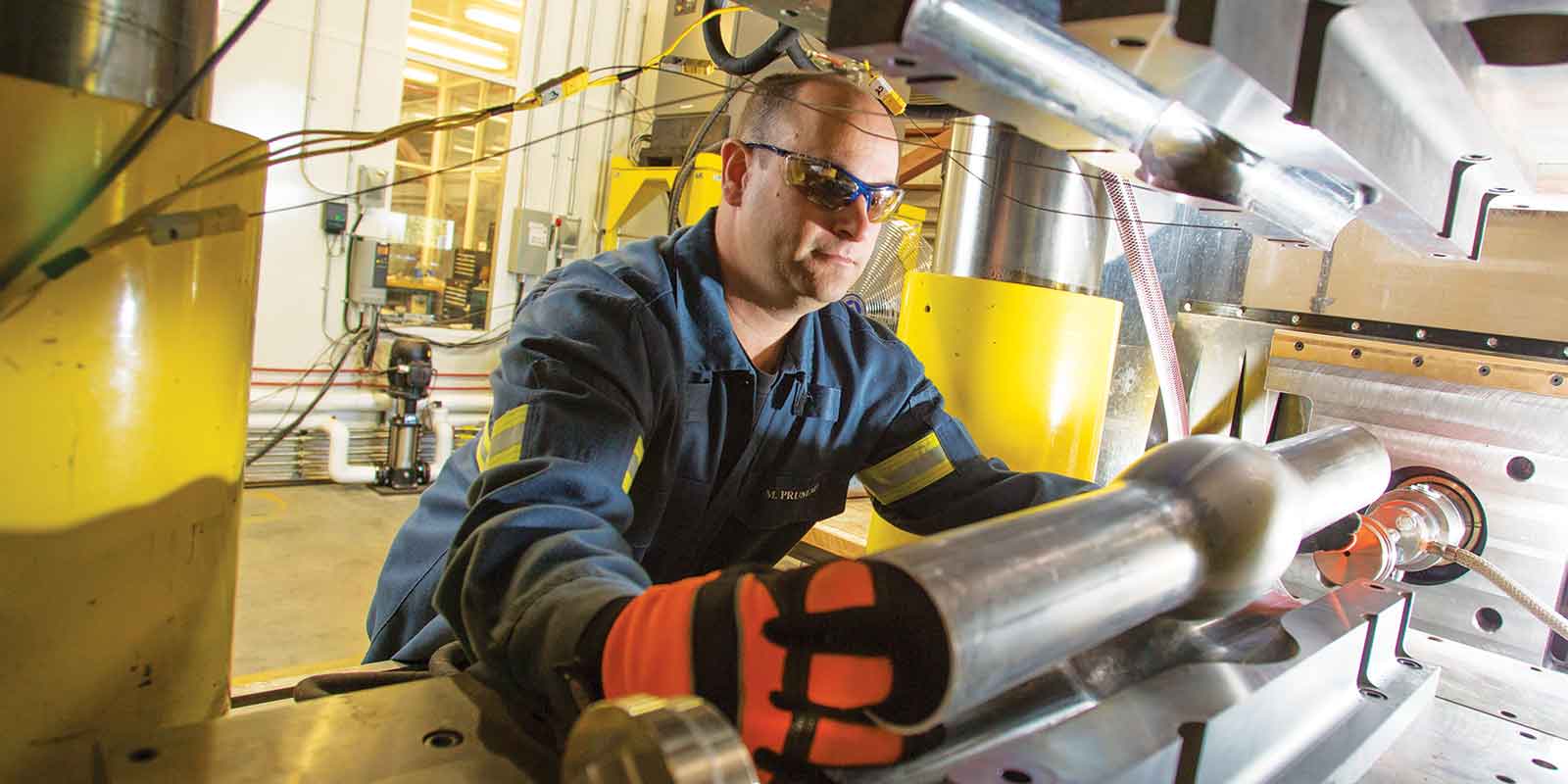 From digital technologies to state-of-the-art research facilities, Manitoba is leading the charge on the evolution of advanced manufacturing.

Historically, we have been a ‘bricks and mortar’ society, grouped into economic silos of industry, education, and government. That has been especially true of manufacturing, which — by its very nature — relies on complex physical infrastructure to produce tangible goods.

The way those three pillars interact, however, has been changing for some time.

Colleges and universities no longer function at arm’s length from industry — they are an integrated part of the innovation and skills supply chain. Governments, too, are becoming direct players in the development of assets designed to assist businesses in the commercialization process.

Yet the world continues to spin increasingly quick on its technological axis. Without coordination, seamless collaboration, and resource-sharing, industries and even nations can be left behind.

Enter the drive toward the factory of the future — not defined by four walls and a singular shop floor, but by its ability to connect, communicate, and enable companies to compete in the next generation of global commerce.

It’s called Industry 4.0. And manufacturers everywhere are starting to embrace the ideology.

Led by major players in industry, academia, government, and the services sector, the Advanced Manufacturing Coalition (AMC) is a new group comprised to support the ongoing evolution of manufacturing through research. Among its members is Canadian Manufacturers & Exporters (CME).

“In Canada, we are behind the U.S. and Europe in terms of implementation of 4.0 technologies,” says CME Manitoba Vice President Ron Koslowsky. “More than half of companies — probably 60 per cent — haven’t done anything or have just started to incorporate it in its most basic form. We have to do better than what we’re doing.”

But, according to Koslowsky, the horizon is not all gloom and rain clouds. The limited size of the sector comparative to other manufacturing hotbeds means Manitoba — and, by extension, Canada — enjoys a nimbleness that results in a competitive advantage. Perhaps most notably, it means stakeholders and resources can be pulled together to push in the same direction with relative agility.

“Our hope is that Manitoba will be the place where SME manufacturers can go for help,” he adds. “The typical SME sometimes gets shut out of the support they need. They become suppliers to the companies that receive it, but don’t get into the guts of Industry 4.0 themselves. If we can figure out how to up their game, we have a leg up on other markets.”

Other organizations, such as the National Research Council (NRC), are adding fuel to that vision.

When the NRC opened consultations in Manitoba on how best to support its factory of the future initiative (since renamed the Advanced Manufacturing Program, or AMP), participation was broad and plentiful. The AMC provided a holistic summary of what competencies exist, what gaps there were in the labour force, and what needed to happen to seize on Industry 4.0.

One of the first steps was to clearly define what the term meant to manufacturers.

“Industry 4.0 is the digitization of the factory, from operations to management, pulling together advanced technologies in a way that accelerates innovation in both product and process,” explains Koslowsky. “We wanted common messaging, and that’s exactly what we’ve been able to establish.”

For those still grappling with the lingo: Industry 4.0 essentially translates into the Fourth Industrial Revolution. The first was mechanization, the second centered around electrification, and the third focused on automation. Now, the fourth is about ‘smart’ materials and systems that can sense, collect and analyze data, and adapt as needed.

It’s not an easy notion to fully understand at first. And that is precisely why the NRC contends that seeing may be believing.

In 2015, the Crown corporation announced it would be injecting $60 million into a new research facility to be built in Winnipeg. While NRC Vice President of Transportation and Manufacturing, François Cordeau, notes the building’s completion is still several years out, the process is well underway.

“Our research facilities across NRC often have multiple mandates,” says Cordeau. “In the case of Winnipeg, it is designed first and foremost to support an advanced manufacturing program, but it may also support other objectives. It is being built as a flexibility facility that we can modify with time to accommodate different requirements.”

The land for the project has already been selected in the north end of the city, and the next step is to have the land serviced, which is due by August of this year. Once that is complete, the NRC plans to formally acquire the parcel and begin construction in March 2019, with a completion date of March 2021.

Roughly 75 people are expected to be employed in the up-to-45,000-square-foot building. Most of the space will be dedicated to labs.

“What we’re planning to have in there is a series of equipment to support advanced manufacturing, specifically areas like additive manufacturing and advanced inspection technologies — machine vision and robotics applied to inspection,” outlines Cordeau. “There will be research teams that work collaboratively with other partners in academia and industry to develop technologies that can be licensed to other industries or commercialized.”

It will also likely feature a demonstration wing, because a lot of SMEs don’t have the resources to understand the benefits or challenges of implementing Industry 4.0 technologies without first ‘kicking tires.’

For example, the instinct of many companies is to turn to robotics to solve repeatable process challenges; yet, a majority fail to properly think through the viability and effectiveness of the application before making the investment.

“We do want to have the capability for industry to come in,” adds Cordeau. “The same demonstration area we foresee will be available for training — not necessarily through NRC, but through our partners.”

Two of those partners will almost certainly include the University of Manitoba and Red River College.

Cyrus Shafai, professor and associate dean in the U of M’s Faculty of Engineering, says its staff has been meeting regularly with members of Manitoba’s manufacturing community with the goal of improving competitiveness in the changing industrial climate.

“New professors have been hired in targeted areas and new courses have been established to provide training in advanced manufacturing processes and industry practices,” he says. “The faculty has identified research and expertise areas as well, so that we can better engage with industry partners. In conjunction with this, staff have been hired into industry partnership roles to support the establishment of industry-university links in advanced manufacturing.”

Keeping one eye keenly fixed on the future is extremely important. Technologies regularly take years to develop, and require a changing toolbox of skill sets and disciplines.

These factors pose significant challenges and potential costs for industry to absorb on its own, so post-secondary partners have become increasingly popular in recent years to help manage the risk.

This collaborative approach is anything but foreign to Red River College, which has long-supported manufacturers with highly customized training programs and applied research initiatives. The college recently received $10 million in new funding — a portion thereof earmarked for the AMP venture.

“Over the last 14 to 17 years, we have invested a lot in equipment and capabilities to serve aerospace and manufacturing,” says Oyedele Ola of the Technology Access Centre for Aerospace and Manufacturing. “NRC is familiar with that now, because they have visited some of our sites, so they know what we have. They see the opportunity to leverage what we already have and build on those capabilities as part of the Advanced Manufacturing Program.”

Ray Hoemsen, the college’s executive director of research partnerships and innovation, points specifically to the heavy vehicle and aerospace sectors in the region as areas of focus.

“In the past three years, there have been various discussions with NRC on the aerospace and heavy vehicles side. They don’t want to duplicate any capability regionally or within NRC’s own infrastructure. It will be complementary,” he explains. “My vision would be that, once [their facility] is operational, we would have some space there to conduct applied research, training, and to support  NRC’s initiatives.”

As Ola points out, however, not Red River nor the U of M nor industry is waiting around on their hands. They’re all putting the feet to the proverbial pedal.

“AMP is not about the building. It’s a program. We now have something called Manitoba QuickStart for the AMP, where different people are looking to get something going prior to the physical location being established,” imparts Ola.

Koslowsky says several projects are moving forward currently that could get funding for research and the application of digital technology, “and they will be public in the sense that they’ll be open” for other companies.

“It’s all about encouraging innovation. This year is about putting in place concrete solutions.”

All that innovation is key to Canada’s future, adds NRC’s Cordeau.

“It’s well-known and well-publicized that Canada is doing poorly in terms of improving its productivity. The effort in advanced manufacturing is actually to de-risk the introduction of new technologies to the manufacturing industry in Canada so they become more productive and competitive.

“Other countries are doing it. Other countries are introducing Industry 4.0 technologies — robotics, additive manufacturing, artificial intelligence, big data analytics. There is a need for Canada to introduce its own technology and facilitate the implementation within industry so they become more competitive. That is why we’re doing this.”

Cordeau sees the AMP as assisting more than traditional heavy manufacturing, too. Food processing is another sector he believes the AMP can boost.

But, in the end, it’s all about providing real supports that help local companies make a big difference on the world stage.

“This is about connecting the brains, facilities, equipment, training, and research to allow companies, including SMEs, to see, practice and safely implement the latest in advanced manufacturing technology,” concludes Koslowsky. “The goal is to support manufacturing in very practical ways, and I think we are well on the road to doing just that.”

Maybe the factory of the future isn’t that far away after all.