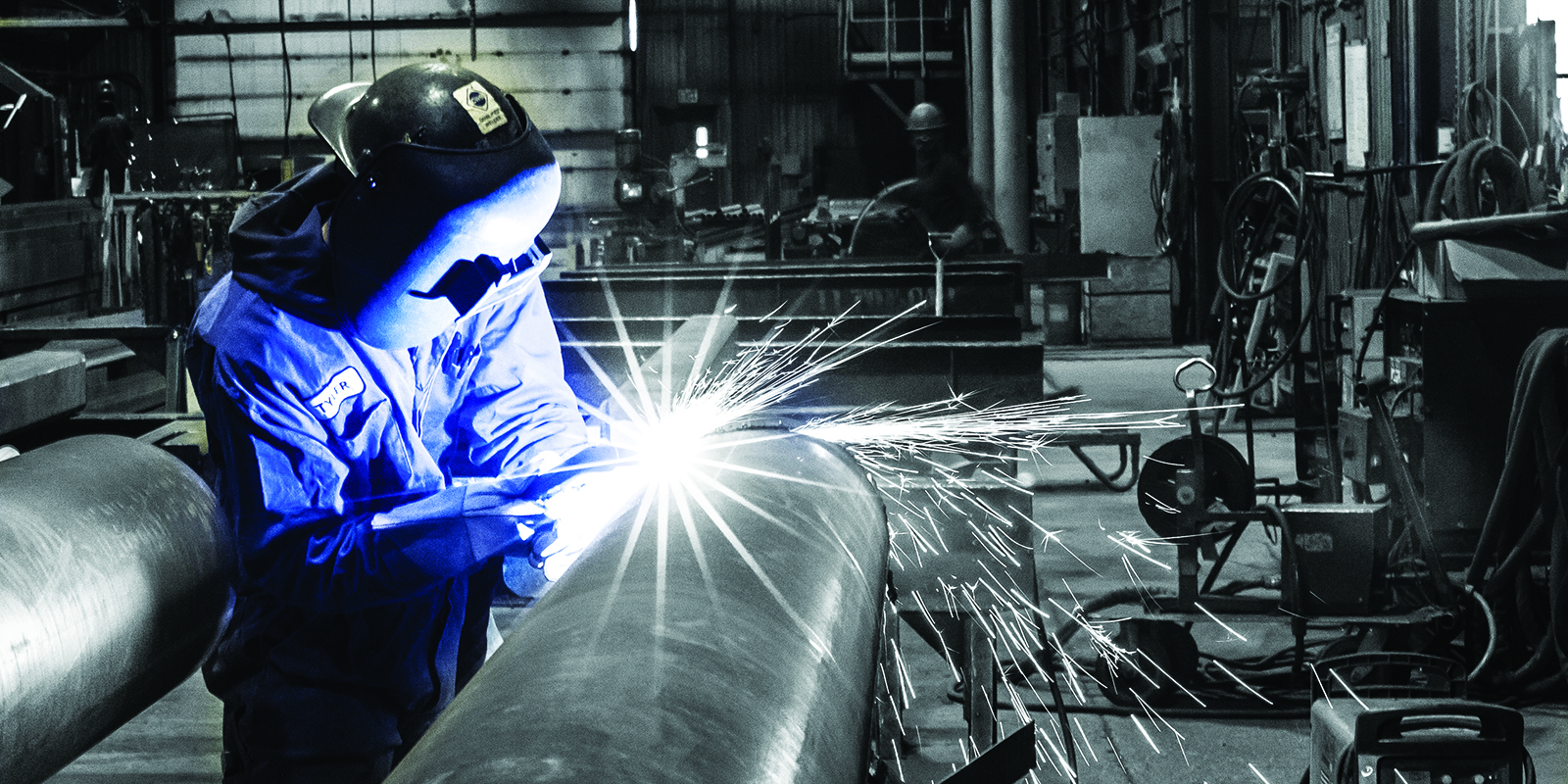 With USMCA negotiations in the books, manufacturers are asking ‘What’s next?’ for the Canada-U.S. trade relationship

By just about any metric, NFI Group Inc. (formerly New Flyer Industries) is the poster child for the Prairie manufacturer that has integrated its supply chain throughout North America.

The Winnipeg-based bus-maker generates close to 90 per cent of its revenue in the U.S. and has consistently met the rising and stringent Buy America requirements. Being able to work within these protectionist parameters allows municipal transit authority customers to receive federal funding to purchase NFI’s Xcelsior buses for fleet updates.

The company already had production facilities in Minnesota, North Dakota, and Alabama, before opening a 300,000-square-foot parts fabrication plant in Kentucky this past September. And, despite the kind of careful, long-term planning that NFI is known for, it had little recourse but to make the tough decision to move 90 positions from its Winnipeg production headquarters to the new Kentucky facility in November.

That represents a mere three per cent of its current Winnipeg workforce, and the Buy America provisions — relating only to direct purchases by the U.S. federal government on rail or road transportation — is outside the scope of the renegotiated NAFTA.

Still, somehow it seems indicative of the general sense that it is getting more difficult to do business south of the border.

The landscape, especially for manufacturers, was not much altered by the completed negotiations on the U.S.-Mexico-Canada Agreement (USMCA), which concluded at the end of September but have not yet been signed or ratified by any of the three countries.

Unfortunately, that also means the costly, margin-crushing U.S. tariffs and Canadian reciprocal tariffs on steel and aluminum remain in place.

Carlo Dade, director of the Trade & Investment Centre at the Canada West Foundation in Calgary, says, “From a technical aspect, for someone who is not concerned with the larger strategic or political or trade implications, there’s really not much different for manufacturers with the new USMCA. In essence, the agreement was about trying to hold onto what we had.”

But, for many, the entire process has been a ‘shot across the bow’ from U.S. policymakers.

In a recent interview, Canada’s Foreign Affairs Minister Chrystia Freeland said, “When I look at the deal we achieved, I am absolutely confident that it’s a good deal for Canada.” After all, the pact was negotiated in the context of an unconventional U.S. presidential administration that campaigned on fundamentally revamping or even severing NAFTA altogether.

There is no indication when the tariffs, however, will be lifted; and now that the Democrats — arguably the original American ‘protectionists’ — control the House of Representatives, the whole process may be in for one more drawn-out political set piece.

“We’re not out of the woods yet,” Dade suggests. “The other issue with ratification is that there are still some things that have to be worked out. They still have to do the legal scrub. That process could still be very disruptive.”

Meanwhile, along with riding the normal economic waves, manufacturers have had to endure close to two years of uncertainty and months of expensive tariffs that are eating into whatever is left on the bottom line.

WGI Westman Group Inc. is a privately-held company that owns culvert and metal fabrication shops — 67 of them — mostly in Western Canada, including well-known brands such as Meridian, Behlen Industries, and Westman Steel.

Paul Cunningham, CEO of WGI Westman, is not particularly concerned about the twists and turns of trade policy as he is with ensuring all his plants are properly staffed up.

“As for [the USMCA], for us at this point, nothing has changed either way — whether they sign it or not,” he explains. “What has really hurt us, though, is the tariffs. The minute the tariffs went on, the local mills just raised their prices.”

WGI Westman operates a couple of shops in Iowa, but, in total, only about 20 per cent of its revenues are from U.S. customers. Cunningham says the U.S. market remains of interest, although the company has had to go hard just to keep pace with domestic demand. Through all the uncertainties over the free trade landscape, one of the more noteworthy alterations to their business — other than the higher cost for steel and aluminum — is that there doesn’t seem to be as much U.S. competition to deal with north of the 49th Parallel.

“The U.S. economy is charging ahead and, as a consequence, we are not seeing as many U.S. competitors coming up here as we used to, or as aggressively as they used to,” adds Cunningham.

There are others, like Carlo Dade, who are not impressed with the details of the new USMCA, especially in comparison to the modern features of other international free trade agreements that Canada has also recently entered into.

He believes the 11-nation Comprehensive and Progressive Trans-Pacific Partnership, which is on track to take effect by the end of the year, and the Comprehensive Economic and Trade Agreement, which is already in place with the European Union, give Canadian companies significantly more modern trade parameters than is the case with the USMCA.

“It was clear with these negotiations we were not going to get an updated NAFTA,” says Dade. “In fact, we already had an updated NAFTA that met most everyone’s concerns — a 21st century ‘Windows 10’ trade agreement that was the Trans-Pacific Partnership (TPP).”

Of course, President Trump withdrew the United States from TPP negotiations shortly after taking office, forcing other signatories to revisit the agreement without the world’s largest economy at the table.

“NAFTA moved us up from Windows 95 to Windows 97. Canada was just hoping that Trump wasn’t going to send us back to Windows 3.0.”

While some experts would have liked to see a more robust USMCA borrowing on the strengths of the TPP talks, a ‘watered down’ accord protects much of the powerful advantage Canadian exporters have when it comes to accessing the U.S. market. Take, for example, the ongoing work around regulatory harmonization, which is accomplished through the joint efforts of the Canada-U.S. Regulatory Cooperation Council.

“I don’t think people realize how much of an advantage that is for us, and that is not an area contained in NAFTA,” says Dade. “Luckily, Trump hasn’t figured out what regulatory harmonization really is, and anyone who knows what it is in D.C. keeps their mouths shut about it every time he walks into the room.

“This is what distinguishes us from the Germans and the Japanese. With us, our rules and regulations are [largely] the same as theirs. That gives us a huge advantage selling into the U.S.”

Gerry Price is the CEO of Price Industries — another large, privately-owned Manitoba manufacturer, which produces HVAC products for the non-residential construction market throughout Canada and the U.S.

With the majority of its sales in the U.S. and its sizable production facilities equally split on both sides of the border, access to the U.S. marketplace is not just an avenue of growth for Price — it is fundamental to its future.

“If we want to protect 1,000 jobs in Canada, we need to have a good relationship with the U.S.,” Price says. “We could not replace that with the rest of the world in 100 years. There’s not a chance we could manufacture product in Canada to the scale we manufacture today and replace American business by trading with the Pacific Rim countries. Not a chance. Zero.”

There nevertheless is an increasing call for Canadian trade promotion supports to slant toward geographic diversification. The long-standing convenience of cross-border trade between Canada and U.S. has created sophisticated supply and production chains that will continue to bind Canadian and U.S. partners. Now may be the time to focus attention elsewhere.

According to Dade, that’s exactly what trade diversification will require — time.

“The U.S. is still the richest, easiest market on the planet, and for lots of businesses, it still makes sense to take the risk and go to the U.S,” he says. “But now that trade elsewhere has become more attractive, it just gives businesses the incentives to build supply and production chains into these markets as well.”