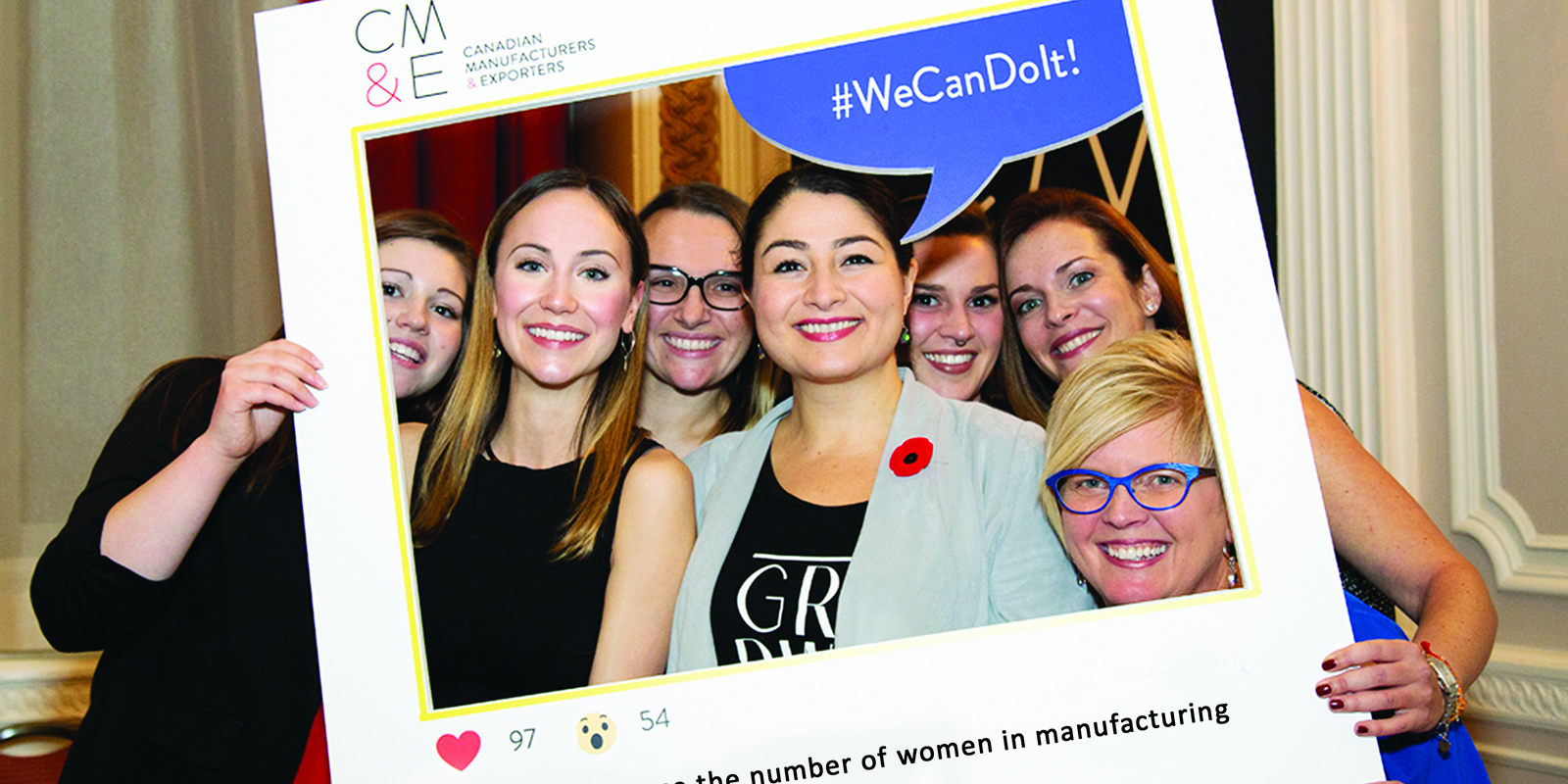 From a young age, Madi Griemann followed in her father’s footsteps. Literally. A naturally curious child, she would tail close behind him as he walked about his mechanics shop, wondering what he was doing and the types of equipment he was working on.

The formative years of her life were split between that shop and the industrial arts facility at her school in Moosomin, Saskatchewan, where it didn’t take long for Griemann to decide that she wanted a career in manufacturing.

“I always knew I was heading for a trade since I was little,” says Griemann. “I liked working with my hands and keeping busy. As I started taking more shop classes, I realized the ones I liked best were those related to metal and manufacturing.”

Griemann, 17, is one of four recipients of the national Women in Manufacturing scholarships, sponsored by Canadian Manufacturers & Exporters (CME), Fiera Foods, and Artistic Skylights.

Women in Manufacturing (WIM) is a pan-Canadian initiative of CME that aims to increase the number of females employed in the manufacturing industry. The awards were presented in Ottawa this year at CME’s annual conference in support of the education of young women entering the manufacturing workforce. Ten scholarships in the amount of $4,000 will be given out between 2018 and 2020.

“The fact that I’m one of four women chosen, it’s almost a confidence-booster that you are on the right track as a woman in manufacturing,” says Griemann. “It’s so reassuring to know that there are other girls out there doing this, too.”

Griemann is enrolled in the Innovative Manufacturing program at Saskatchewan Polytechnic in Regina, where the shop classes are still her favourite. She is expected to graduate in 2020, with plans of becoming a journeyman machinist.

Griemann says that although some people question her decision to go into manufacturing as a female, the community at her school is highly supportive.

“We have a program at [SaskPolytech] called Women in Trades and Technologies, where we have pizza lunches and we can meet and talk,” explains Griemann. “I think the guys are getting a lot more accepting, but if anything were to be going on, you could share it there.”

Griemann maintains what she is most excited about is getting to do what she loves every day.

“Manufacturing has such a long history in Canada that it needs to continue to thrive,” says Griemann. “Everything in your world is manufactured. It is an important sector, and I’m excited to be able to contribute to that.”

Sarah Harris is another Prairie recipient of the national scholarship. Harris studies biomedical engineering at the University of Manitoba, and recalls a pivotal moment last June during her internship at the Orthopaedic Innovation Centre that solidified her desire to pursue biomedical manufacturing.

“The first time I got to see a surgery was a bilateral knee replacement,” says Harris. “It was kind of intimidating. Up until then, I had only ever done cadaver work, so this was amazing because it was live.”

Harris says witnessing the surgery and seeing all the tools in the operating room put to work made her realize she wanted to be a part of the manufacturing of medical devices.

“It was just insane to see someone go through that whole process and know that it was going to have so much of an impact on them,” says Harris. “You see someone after surgery and it’s almost like magic. They’re literally open on a table, and then they recover.”

Now in her third year at the university, Harris also serves as a co-founder of the Women of Manitoba Engineering Network at the U of M. The group aims to promote opportunities for female-identifying engineering students, including financial support and networking events connecting them to mentors and role models.

“Two or three years ago, I wouldn’t have even been able to describe what manufacturing was or meant,” says Harris. “Especially when you’re at the beginning of your career, you’re looking for people to look up to and inspire you to pursue something. Especially as a woman, if you don’t see other women doing something, you don’t even consider it or think that it’s something you could do.”

These are sentiments echoed by Rhonda Barnet, the outgoing chair of CME’s national board, as well as and president and COO of Steelworks Design.

“If you can see me, you can be me,” says Barnet. “By sharing the stories of successful women in today’s manufacturing world, we hope to encourage mentorship, and to help change the image of manufacturing for women and girls to inspire them to pursue a career in the sector.”

As for Harris, she says receiving the scholarship is a very validating experience.

“I put so much work into school and getting this job, and you’re working two jobs trying to support yourself and pay for school,” says Harris. “It felt so nice to have someone acknowledge that and support it. Everything has been almost too good to be true.”

For more information on WIM, to partner, or to pledge your support, visit womeninmanufacturing.ca