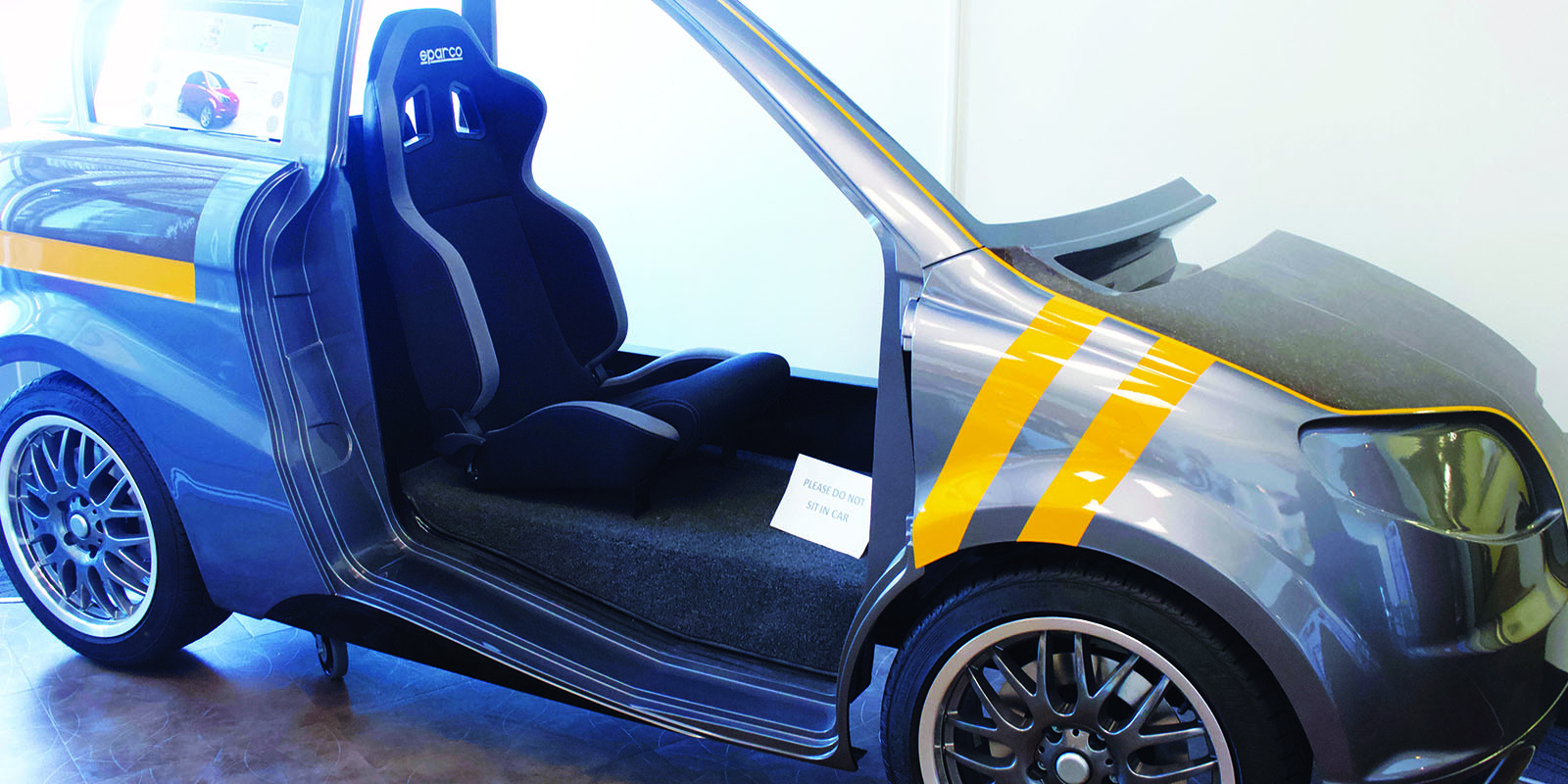 From cars made out of food to the latest in ‘smart factory’ technology, the future in Manitoba is already here

A car made of flax and a motorcycle made of hemp: If these sound like inventions from the mind of a science fiction writer, think again. These products and others like them are actually the creations of the Composites Innovation Centre (CIC) in Winnipeg.

At the CIC, almost anything goes when it comes to the types of products they generate. Anything that has material at its core, really, is fair game. Take the flax-based Kestrel Car, for example. The car was a pilot project with an Alberta company that looked at the applicability of using flax in woven and unwoven states to see if it could be formed into car parts. As it turns out, it could.

Though it didn’t go into the commercial production stage, the Kestrel Car managed to demonstrate that agriculturally-based composite materials could be viable alternatives to traditional automobile parts. CIC Chief Executive Officer Doug McCartney says the applications behind the Kestrel Car are still being put into practice at the CIC for future ideas.

“One of the things that our organization is best positioned to do is to take ideas like the Kestrel Car and, through the innovation and capabilities that we have in-house, look at how to apply those ideas in a real-life situation,” says McCartney.

The CIC does most of its design, testing, and prototyping in the same facility. Many of the organization’s prototypes are produced in partnership with smaller businesses that may lack the means or funding to bring their products to life. These models, including the Kestrel Car, are on display in the centre’s lobby for public viewing — and inspiration. Even the furniture in the centre’s lobby is made of composite materials.

Thanks to this spirit of innovation, the CIC is just one of a few entities in Manitoba’s manufacturing ecosystem that are edging ahead of the curve when it comes to Industry 4.0 and the arrival of a new age in digital manufacturing.

Industry 4.0 is a broad term to describe the technological revolution that’s shaking the global manufacturing industry to its core. In a nutshell, it concerns nine transformative technologies:

• The industrial ‘Internet of Things’;

The term entered onto Bob Hastings’ radar when it was first published in an article by the German government in 2011.

Hastings is the CEO of West Canitest R&D (WestCaRD), an economic development corporation in Manitoba, funded by GE Aviation, that promotes jobs and economic growth in the aerospace sector — one of the province’s largest manufacturing subsects. GE Aviation itself has a world-class, $80 million facility at the Winnipeg airport, and a Pratt and a Whitney/Rolls Royce JV have another similar facility in Thompson Manitoba.

About 85 per cent of all the world’s new commercial aircraft engines make their way through one of these two facilities as part of their certification processes. All jokes aside, Manitoba is evidently the ideal place to conduct ‘cold weather and winter testing.’

Hastings says he encourages others to embrace the changes that Industry 4.0 is bringing, especially when it comes to robotics and automation.

“People say, ‘How many jobs will automation take away from human beings?’” says Hastings. “Automation isn’t something that takes jobs away. It is something that makes it possible for us to do business.”

Hastings and his team are constantly working with the latest digital technologies that are at the heart of Industry 4.0. Additive manufacturing is a large part of that focus — and for good reason.

“We have the only metal 3D printing company in Western Canada right here in Winnipeg,” he muses.

Hastings is referring to Precision ADM, a metal additive manufacturing company that caters to the medical, aerospace, industrial, and defence sectors. In 2018, the 3D printing industry exceeded $7 billion, according to the annual Wohlers Report. Sales of 3D printers surged nearly 80 per cent in 2017 alone.

So, what’s next for the future of Manitoba manufacturing? It truly is the million-dollar question.

Back at CIC, McCartney believes the challenge is going to be channeling all the impressive individual activity within separate organizations into a unified push to advance the sector as a whole.

“The future is going to be an amalgamation of a lot of factors,” he says. “It needs the collective will to get there. That is what’s going to be the difference between staying comfortable where we are and growing beyond what we have now.”

McCartney adds there is tremendous opportunity for manufacturers in medical devices, exploring clean technologies, and honing in on infrastructure development. Exploring these new opportunities and continuing to push boundaries is what will push Manitoba forward.

“You don’t skate to where the puck is,” says McCartney, echoing the famous quote from hockey legend, Wayne Gretzky. “You skate to where the puck is going to be. We need to be focused on what new opportunities and new industries we can be creating that aren’t yet defined. I don’t think we should limit ourselves by just looking at what we have now.”

Hastings, meanwhile, takes this theme of collective action even further.

“It’s not just collaboration between different companies,” says Hastings. “We need government, academia, and industry to work together. The boundaries between work and academia are going to get more and more blurred.”

The idea of collaboration as a key to the future isn’t a new one. Canadian Manufacturers & Exporters (CME) established Manitoba’s Coalition for Advanced Manufacturing (CAM) in 2017 for precisely that reason — to promote the exchange of information on advanced manufacturing processes. CAM operates with five ‘priority pillars’ in-mind — all of which borrow from both McCartney’s and Hastings’ narrative:

In Manitoba, the lines between manufacturing and education are becoming increasingly integrated with each passing day.

Red River College (RRC) recently opened a 104,000-square-foot Skilled Trades and Technology Centre that will see 75,000 trained workers pass through in the carpentry, electrical, mechanical, and manufacturing sectors by 2020. The centre is home to a new ‘smart factory’ chalked full of robotics, automation and additive manufacturing equipment, and high-speed robotic inspection technologies.

Another facility at RRC — the $95 million, 100,000-square-foot Innovation Centre — will also open its doors in the Exchange District by 2020. This facility will focus on applied research and entrepreneurship, and will aim to provide students with the same systems and tools they will encounter in industry, further narrowing the gap between shop floor practicality and academic preparedness.

And, finally, there’s the National Research Council’s $60 million advanced manufacturing research facility, slated for construction in Rosser, Manitoba, beginning in March 2019. The facility will reportedly have space for 100 of its own staff, along with employees from other companies, as well as college and university students to boot.

It’s the latest step in Manitoba’s strategy to embrace industrial change — a change that, according to Hastings, is already on our doorstep.