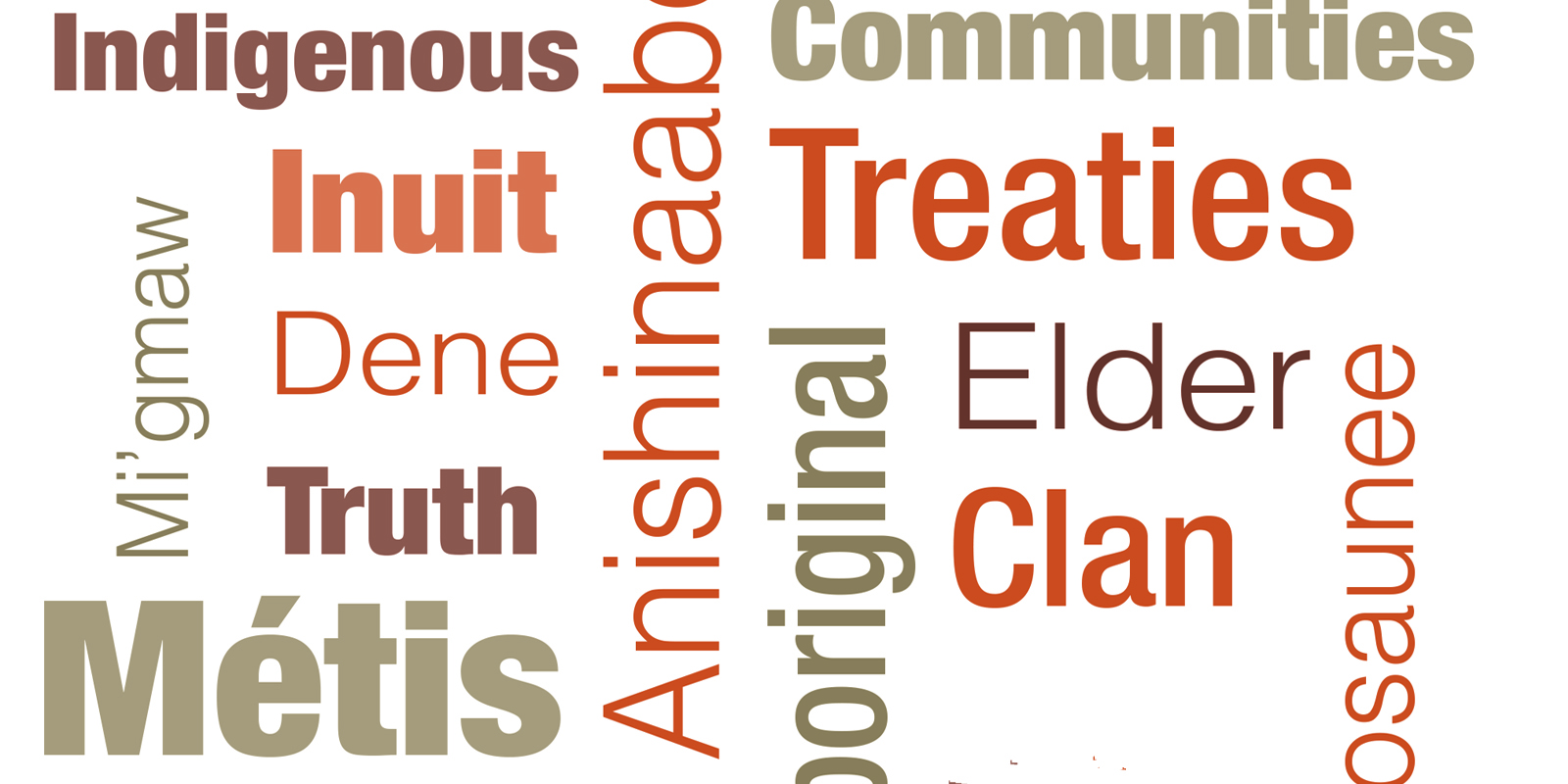 Indigenous, Aboriginal, Indian or First Nation,
have you asked this question? No?

Why does it matter?

Language is powerful. Words can become labels that divide and perpetuate ignorance. They can also build bridges toward respect, understanding, and inclusivity.

In Canada, this is fundamental to our ongoing path toward reconciliation and inclusion between Indigenous and non-Indigenous people. There is learning required; there is replacing of old habits or ways of thinking required. But these changes are not unique to non-Indigenous people. I along with most Indigenous people, represent the intergenerational impacts of assimilation policies and cultural genocide. We too are learning who we were in order to reclaim who we are. We are all not in the same place of that reclamation process. It is complex and it is humbling, especially with regard to language.

Indian is an expression rooted in Canadian law with a specific legal definition. It has nothing to do with the traditional terminology of our culture nor does it capture our unique identities. Traditional terminology is how Indigenous People self-declare, and it is how we prefer to be acknowledged in the broadest context. For example, if speaking at an event in a professional capacity, I would be fine being introduced as Kimberley Puhach, followed by my job title. However, I would then introduce myself by my traditional (spirit) name, my clan, and my Nation.

Quick Tip #2: Which rules do you follow when rules don’t apply?

Indigenous languages are oral-based so the conventions of Western languages simply do not apply. Elders and scholars have and continue to work tirelessly to create such translations, but in many cases they simply do not exist. This is why you will seldom find consensus on Western spelling of Indigenous terms. The “why”, the “what”, the essence of Indigenous language, is conceptual. It is story-based, spoken, and alive.

As I mentioned, I am very much on my own personal journey of identity reclamation, and part of this path requires me to seek the knowledge and perspectives of others from within my own or fellow First Nations.

Why reclaiming our story is important

This issue of history and its impact on terminology emerged in my conversation with Traditional Knowledge Keeper and Indigenous activist, Leslie Spillett, Inninew (Cree) who gave a wonderfully comprehensive answer to the question. “This is complex especially for people who haven’t had much contact with First Peoples,” says Spillett “Indeed it can feel like walking through unfamiliar terrain littered with land mines. The original names were altered by colonial contact, but prior to that each nation had its own understanding of identity and nationhood. Nationhood was defined by land or territory, language customs, laws, governance systems, spiritual laws, shared history, world views, etc.”

For example, Spillett says Anishinaabe, the people, were referred to as Ojibway, Saulteaux, or Chippewa by Europeans. Likewise, the Nehiyiwak, were called Cree; and the Lakota, Dakota, and Nakisha became known as the Sioux. Indigenous People still refer to themselves by those names the Europeans used. Changing this is an ongoing process that begins with learning one’s language Nehiyiwak, Anishinaabe, Haudinishoni, Mi’gmaw (not Mic Mac) and with others asking them, respectfully, what they prefer to be called.

Once you know this history, you understand why team names like The Fighting Sioux or the Redskins are deemed inappropriate or downright offensive. Substituting them with a conventional name is a necessary step toward re-educating all people about the true history of Indigenous People. Cultural appropriation is an important topic to be understood, and, when it is, there is an opportunity for reconciliation.

In the case of the Métis, Spillett adds they are a distinct cultural group with elements of nationhood including land base origins in the Red River Valley. In terms of labels and their power to divide or degrade, Métis were also commonly called “half breeds,” a term Spillett says was adopted and, for some, still used to this day. Inuit, on the other hand, reclaimed their collective identity, shedding their colonial label “Eskimo.”

According to Spillett, this process of identity reclamation continues to evolve.

In the past decade, the use of the word Indigenous has gained popularity. Used to describe groups of many nations in the Americas, Indigenous emerged through the collective work of First Peoples drafting the United Nations Declaration on the Rights of Indigenous Peoples.

As we move along the path of reconciliation, although outdated terms like Ojibway/Ojibwe, Cree, Aboriginal are not offensive, what is important to be mindful of is how and when it is used.

When it comes to terminology, context and motive matter

Respecting the context and the motive of language is subjective.

I asked a young Anishnaabe woman her views on terminology and how she self-identifies. She offered, “I identify as Indigenous to most people but I will say that I am Anishinaabe to those who I know are familiar with traditional terminology. In that case, I also share where I came from and my community.”

I asked what her ideal future would be when it comes to identity and terminology. She explained that her hope is that everyone would understand when she identified herself using her Anishinaabemowin language, specific nation and community, rather than through broad terms like Indigenous or the colonialized versions previously mentioned.

A Nehiyiwak (Cree) Elder and Survivor from Saskatchewan, who is now in his 70s, provided yet another perspective: “Canadian Indigenous First Nations peoples identify each other by the role they have in the community,” he says. “. . . a friend is simply ‘Tanisi Neechi’ which translates to ‘Hello my friend.’ His traditional point of view illustrates the kinship within Nations, between First Nations people, and between First Nations and non-Indigenous people. Though deeply connected to his culture and spirituality, the Elder often used the term Indian when referring to himself or Indigenous peoples in a broad and general sense.

This spoke to me about the impact systems and structures have had on him. He grew up under the Indian Act (First Nations are still governed by this), a law designed to assimilate our people into Canada. He experienced decades of blatant cultural genocide in Indian Residential School yet maintained his proud Nehiyiwak (Cree) identity. Those labels and those experiences affect his language to this day.

It is best not to use the term Indian when referring to Indigenous peoples, First Nation or Métis. Indian is an outdated legal term with a very specific legal definition that may offend Indigenous people.

So how do we sum it up? It is complicated and will continue to evolve as we move forward. My best advice remains the same. When you are in doubt, just ask. Do so with humility and respect out of genuine curiosity and listen with authenticity and a desire to learn more, but keep in mind the aforementioned guidelines. I also suggest that if you are interested in learning more, educate yourself through the many resources available to the public.

Kimberley Puhach is the director of human resources and Indigenous inclusion at the Manitoba Institute of Trades and Technology. She also serves as chair of the Mayor’s Indigenous Advisory Circle in Winnipeg, and was recently appointed to the MAVEN Leadership Council, which aims to address gender equality in the tech sector.

Have a question? Just ask.

Conversation is a powerful tool. It has the potential to break down barriers, dispel stereotypes, build understanding, and strengthen relationships.

Sometimes, however, the sensitivity around a particular topic can result in those conversations not taking place, regardless of how important they really are. That’s why, in 2019, we here at Prairie Manufacturer Magazine are committing to steps to improve the dialogue.

Each of our four issues this year will feature a Just Ask column that explores diversity and inclusion, and the terms we use in our everyday lives. The next editorials will focus on LGBTQ2S (Fall 2019), and workplace diversity (Winter 2019).

I hope you will join us and be a part of the conversation.