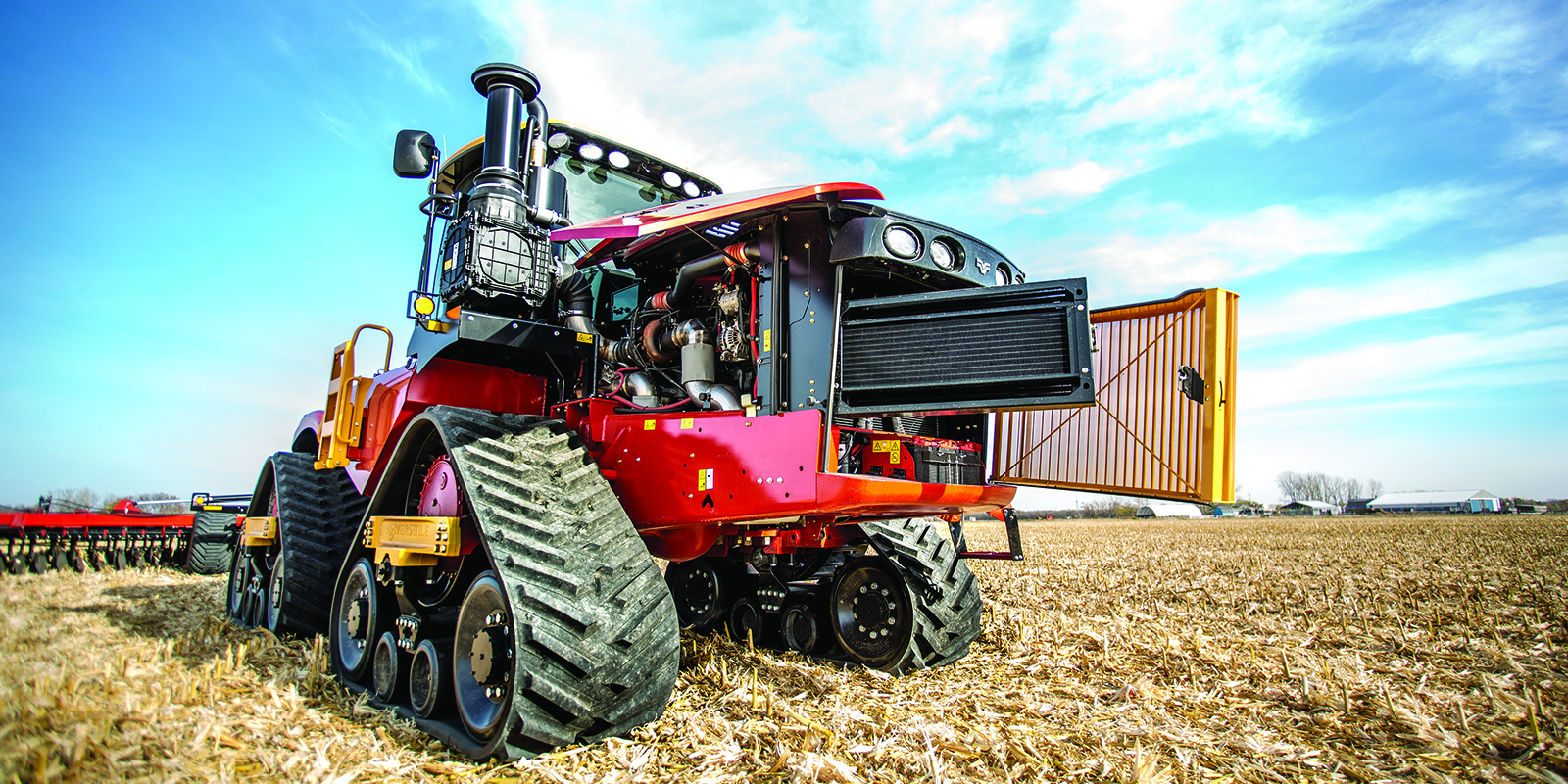 Since the term “tractor” was coined in 1896, tractors and other agricultural equipment have undergone multiple cycles of re-invention that continue to this day.

Today you can find machines with 360-degree LED lighting systems for night work, GPS auto-steer, and electro-hydraulic systems all controlled with the push of a button. Prairie manufacturers, like Manitoba’s Versatile, have been contributing to these technological innovations for decades.

But have the principles of farming really changed since the days of steam engines and horse carts?

The answer is complicated, but one thing is certain: agricultural equipment is a far cry from what it used to be, and machines are larger and smarter than ever before.

It’s about the people

Danny Mann, Department Head of Biosystems Engineering at the University of Manitoba, says his focus is on the design of agricultural machinery specifically from the perspective of the human operator.

“My research has always been: what is the impact on the person who is sitting in the cab?”

Mann says investigating lightbar systems for agricultural machinery kickstarted his research on machine use from a human-factors perspective. Lightbar systems track whether or not a machine like a sprayer is on-track in the field and help guide it along the proper path.

“On the one hand farmers saw it was a great asset. It told them if they were skipping or doing a double application of their herbicide,” says Mann. “They could see the economic and environmental benefits…but they also found that it was extremely annoying to use. It changed the way they had to interact with the rest of their machines.”

“We’ve been looking to understand what information will be necessary to remotely supervise a sprayer or a tractor on the field and still have confidence that what it’s doing out there is okay,” says Mann. “My personal belief is that there’s still going to be a desire for the farm operator to supervise these machines, whether it’s from a tablet from a pickup truck on the field or from a home office.”

Although the trend in recent years has been toward larger machines that can cover more ground in the field, Mann says even that could change in the next few years as automation is explored further.

“You might end up with a fleet of smaller machines working autonomously because you’re not constrained by light hours or the operator getting fatigued. They can work 24 hours around the clock.”

Even with his wealth of knowledge on the subject, Mann says it’s hard to say whether any of his predictions will actually come true given the nature of the industry.

“Our big innovation in the 70s was a draper header,” says Spencer Groth, Honey Bee’s Marketing Manager. “It lays the crops down more evenly, and feeds crops into the combine more evenly, and it’s also a lot less aggressive on the crops.”

Groth says that after the draper header was developed, farmers could maximize their yield and the carrying capacity of their combines. But the innovation at Honey Bee didn’t stop there.

“In the early 2000s, flex drapers came along,” says Groth. “It’s basically the functionality of the draper header having a flexible cutter bar. That was huge in the industry, so obviously everyone jumped on board.”

Rather than hydraulic fluids or springs, Honey Bee uses air which allows the cutters to get closer to the ground.

“We have an onboard air compressor with several airbags that is mounted onto the frame,” explains Groth. “So, when you air that up, you more or less have a rigid header, and you take whatever air pressure that you want, and you’ve got your flex.”

Groth says that while the focus at Honey Bee used to be on producing bigger machines that can cut more crops at a time, the recent push has been for increased efficiency over size.

And as far as automation goes, Groth says there isn’t as much at Honey Bee on the harvesting side, but more at companies focused on the planting side.

“In my opinion it’s because precision is so important when you’re planting seeds in the ground,” says Groth. “When you’re harvesting and scooping it up, it’s a bit different. You can’t really install a GPS for that.”

From Manitoba to the world

While GPS might not work for every application, producers still have access to yield-maximizing technological innovations that don’t require a massive cash outlay or significantly change the ‘how’ of crop production.

Marcel Kringe, founder, owner, and technical agronomist of Brandon, Manitoba-based BushelPlus, is taking on the world with a made-in-Manitoba technology that is helping crop producers realize significantly better yields with an investment that can see payback in only a couple of days.

Kringe started his career in agriculture through an intensive apprenticeship program and completed his Bachelor of Science in Agriculture in his native Germany. After working on farms both big and small, he made the move to Canada.

Kringe was driving forage harvesters and excavators and working for a variety of agribusiness companies before starting BushelPlus as a hobby. Today, as his full-time job, Kringe is developing and manufacturing BushelPlus products and technology in Manitoba, selling them around the world.

Waste not, want not

Kringe’s “eureka” moment came when he realized the savings that were possible at harvest time, but a lot of people weren’t aware because there was no easy way to accurately test or prove it. That’s where his company’s drop tray comes in.

The BushelPlus drop tray system attaches to the underside of a combine harvester and catches samples of the process waste from the equipment. By catching this waste, producers can analyze how much desirable grain and seed is not making it to the truck, but instead ending up back in the field. Grains and seeds left in the field is essentially money left on the table.

“When you work hard as a farmer or agronomist all year to grow this crop and then realize someone could waste five or more per cent of the harvest, it makes you question why you’re spending all that money on the best seed, fertilizer, and spray and then working so hard if we waste it anyways,” says Kringe.

An important aspect of the development of BushelPlus, says Kringe, was the safety improvement the system brings to the field.

“Nobody wants to get hurt doing it the old way, running beside a driving combine trying to throw a tray underneath to catch a sample. The safety aspect of our remote release is a huge payback in itself. Nothing is worth more than a human’s life,” Kringe says.

It’s a journey, not a destination

The BushelPlus team recently released a new design tailored to certain chaff management machines used by customers in Australia and the UK. In addition, the company has also released the BushelPlus App that makes harvest loss calculations easier and allows customers to store machine settings and crop details for future reference.

According to Kringe, “Our main
goal is to keep the customers happy and the quality of product and customer service high.”

When asked for his thoughts on innovation in the industry, Kringe says, “I don’t think most people are aware of how much high-tech innovation we are working with in agriculture these days and how fast it has developed. My grandpa still plowed with a horse, and I remember these stories while watching our equipment today.”

“I think it would be great to have a network or opportunity for young start-ups like us to get in touch with larger companies and work on projects or possible joint ventures together, or even have a mentoring role in some way,” Kringe said.

“In Germany, there are interesting concepts where large companies in other industries are connecting with start-ups and helping them to the next level, without just taking them over or stealing their ideas and running with it. It’s a development that can help both parties in the long run. It’s sustainable, fair for both parties, and a way that can build a solid foundation for a bright future that will create jobs. That is very important for me.”

It’s the collaborative drive for innovation and improvement that is at the heart of research, development, and testing agencies across the Prairies. One such organization is the Prairie Agricultural Machinery Institute (PAMI), based in Humboldt, Saskatchewan.

PAMI was established in 1975 to provide a unique resource to both Prairie farmers and agricultural equipment manufacturers with a focus on evaluation, development, and research concerning agricultural machines. In the 44 years it’s been operating, the Institute has seen massive changes in both the equipment and the market across the Prairies.

The technology shift isn’t just changing work in the field in the rural areas, either.

“We’re seeing new connections in the industry thanks to the technology being deployed. The urban folks working in software and coding are building products and services for the equipment users in the fields in the rural areas. The technology is connecting people across and between regions in new ways,” says Gullacher.

“The ‘big five’ pieces of equipment – tractor, tiller, seeder, sprayer, and harvester – on a typical Prairie farm remain the same,” explains Gullacher, “but the capacity, speed, and technology have changed so much in recent decades. Combines used today have at least four times the capacity of the machines we saw when PAMI was first established.”

Looking back even further, Gullacher says, “When my father was the age my son is now, it took nine tonnes of material to be handled by a crew of threshermen to produce just one tonne of material in the bin. Now it’s one person handling a machine that can process many times that and end up with significantly better results in much less time.”

Where does Gullacher and the PAMI team see the agricultural machinery industry going in the future? Autonomous equipment and granular-level detail for planning and operating.

Getting operators out of the machines is going to be massive for the industry, said Gullacher.

“It’s taking the big iron, making it smart iron, but then taking it back to smaller and smarter iron that will use technologies like GPS, variable-rate applications for seeding and spraying, and even smaller harvesters that will be more accurate and more efficient. The innovation is never going to stop.”