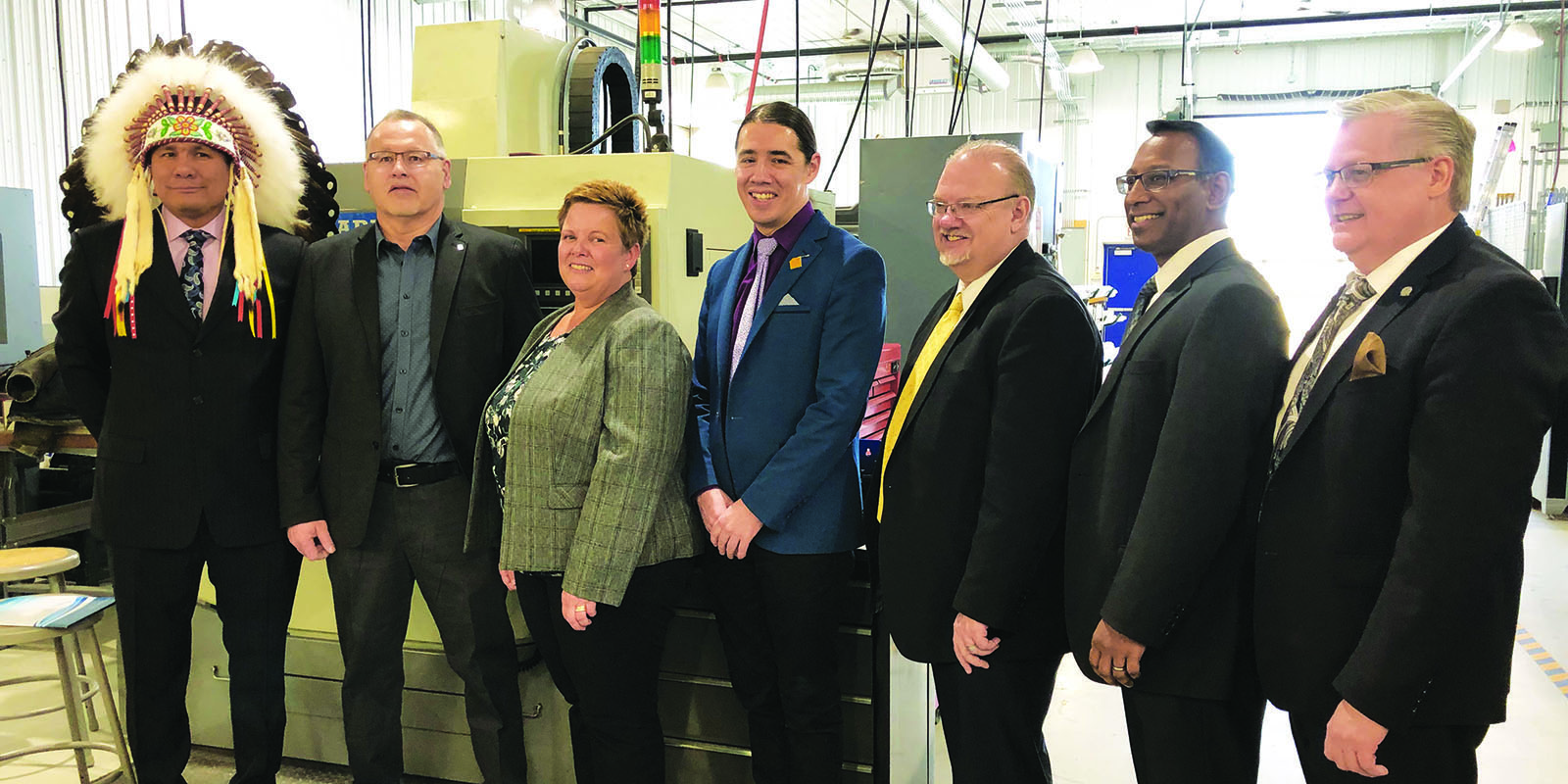 For many years it’s been understood that for the economies of the Prairie provinces to prosper, there needs to be greater engagement with Indigenous populations.

Prairie manufacturers understand the value of increasing Indigenous participation in the industry and momentum is building to try to bridge the gap.

That said, there’s plenty of ground to make up. Of the 40 companies who recently participated in a Procurement Opportunities for Indigenous Business event with government procurement officials organized by the Aboriginal Chamber of Commerce in Winnipeg, there were no manufacturers.

The federal government’s Indigenous Business Directory has about 1,800 companies registered, and while 145 of them are designated as manufacturing, several of them are marketing companies or service suppliers “linked” to manufacturing.

Inroads are being made in the manufacturing sector in terms of labour force involvement and enterprise ownership and the sector is likely no better or worse than others.

Darrell Brown, president of the Aboriginal Chamber of Commerce, is not aware of any manufacturing companies within his membership. He said structural impediments for Indigenous people just to get into a position to be able to access capital can be a challenge.

“Chances are, Indigenous people just don’t have the resources or the personal wealth or the relationship with lenders,” Brown said.

But the chance of encountering Indigenous-owned manufacturing companies is a lot greater today than 40 years ago when the Whitefish Lake First Nation in northeastern Alberta formed the Goodfish Lake Business Corporation (GFLBC) and began servicing the oil sands industry with a dry cleaning and laundry business.

The manufacturing enterprise, which is now the predominant supplier of fire-resistant work wear for the oil sands, began after the dry-cleaning service was up and running. Companies like Syncrude and Suncor requested Goodfish Lake Industrial Dry Cleaning to repair the heavy-duty coveralls they were cleaning.

Sandy Sanderson, CEO of GFLBC, credits the Chief and Council back then of having the foresight and wisdom to see the opportunity.

Not only was the demand geographically remote for many other potential suppliers, but the customers – the big oil companies – were predisposed to doing business with Indigenous communities who were their neighbours.

But just because there was a willingness to do business, the enterprise had to figure out how to deliver.

“Sure, there is a social obligation but, in this economy, it is important to be as good if not better that your competitors,” Sanderson said.

“We certainly get enquiries about how we have developed and I believe the key is that you want to find your niche market,” Sanderson said. “What can you offer that your competitors can’t or won’t offer? A lot of Indigenous businesses in the region and businesses in general in northeastern Alberta have a tendency to look at yellow iron (enterprises that involved the use of heavy equipment like bulldozers and graders). But that is very capital intensive but at the same time very, very competitive.”

Since Sanderson came on board six years ago, the $22-million enterprise has become that much more competitive, efficient and productive. Further, the decision was made to create an independent board and stock it with experienced and influential financial and industry expertise.

Creating a corporate culture that would ensure quality and competitiveness necessary for long-term sustainability is not easy work. But Sanderson has helped instill just that at Goodfish Lake including implementing lean processes. Seven managers recently completed Lean Six Sigma Green Belt, 60 employees went through a Dale Carnegie Training program, and about 10 of GFLBC’s financial staff have participated in programs from the Aboriginal Financial Officers Association.

“That’s really one of the things that had been missing from the company,” said Sanderson who is a member of the Mikisew Cree First Nation in Fort Chipewyan, Alberta. “In the past we did not have a lot of bench strength or a lot of depth. In the last few years we’ve invested heavily (in human resource development).”

“We thought it would be very important for us to make sure these people were looked after,” he said.

Being a sustainable business in what is invariably a competitive marketplace means there has to be a workforce with plenty of buy-in.

“Every little piece of continuous improvement helps show examples, and really allows employees to own it in terms of them finding successes and being able to say, ‘Wow. Look we just shaved this much time off…’,” Sanderson said.

Community buy-in is likely vital for band-owned businesses. Opaskwayak Cree Nation (OCN) near The Pas, Manitoba, has already been dialoguing with the community about the potential development of an aerospace parts manufacturing operation.

Like Goodfish Lake, the precedent-setting endeavour at OCN has solid commitment from customers even before work has begun on the plant.

OCN jumped on board two years ago when Boeing Canada and Manitoba Aerospace, the organization representing more than 30 companies and 5,300 employees in the aerospace sector in Manitoba, put out a call for interest to investigate the viability of an aerospace parts plant in partnership with a First Nation.

The project came out of interest, spearheaded by then head of Boeing Canada, Kim Westenskow, for the industry to reach out to the Indigenous community.

Ginger Martin, CEO of the band’s economic development organization Paskwayak Business Development Corporation, has been working with industry partners and consultants mapping out the project.

A business plan is now in its final stages and set to be completed in June. No one will say what the expected capital costs will be other than acknowledging it will be in the millions of dollars.

Wendell Wiebe, CEO of Manitoba Aerospace, said, “No one has ever done this kind of thing before. It’s exciting. I do think it has potential. The final decision will be OCN’s but at least we can say we helped give them good information for them to make that decision to move forward.”

Ginger Martin admitted that, at times, it seemed impossible. But not anymore.

“Today I can confidently say we can do it,” she said. “There’s no reason why we shouldn’t be able to. We’re grateful we have the support of Manitoba Aerospace and Boeing and Magellan. We would not be able to do a project of this magnitude without them. They have been huge supporters of OCN assisting us in every step especially being able to meet with funders and make those connections.”

For a greenfield development like this to work, patience and extraordinary support from the broader community will provide the greatest chance for success.

Martin said, “We need to do it the right way and that takes time. We want to make sure we start out on the right foot. It can be win-win for all the surrounding area.”

Collaborations are underway with surrounding communities and organizations to develop workforce training programs that will suit the specific needs of this enterprise.

Evidence of success from having the right kind of training resources is already out there.

StandardAero, another Winnipeg aerospace operation, has had a relationship for about 10 years with Neeginan Institute of Applied Technology, an off-shoot of the Centre for Aboriginal Human Resource Development (CAHRD).

Both Heather McCormick, CAHRD’s director of education and training, and Stacey McLeish, StandardAero’s vice-president of human resources, say the depth of collaboration that has occurred has led to StandardAero now relying on Neeginan to train a steady supply of entry-level gas turbine repair and overhaul technicians… who just happen to
be Indigenous.

StandardAero, whose local workforce has held steady at 1,400 for many years, has about 50 Neeginan College graduates on staff including some who have advanced to field service technician, StandardAero’s highest-level technical placement.

McLeish said that while there is an investment of time in supporting the Indigenous grads from Neeginan, their presence in the workforce is nothing exceptional.

“I don’t think we see it that way,” she said. “We’re investing in qualified individuals for our organization. I mean this in the most positive way possible. I think that they (StandardAero’s Indigenous workers) become just another employee.”

Neeginan offers various programs and courses depending on industry demand, including welding, CNC machining, and others in addition to the gas turbine repair and overhaul course.

CAHRD and Neeginan have been successful in obtaining federal funding and industry support and now have modern facilities and equipment that could handle even more than the 100 students currently enrolled.

But McCormick said there is another crucial element required.

“Our training facilities are good. We have top of the line equipment,” she said. “What we really struggle more with is just the personal development and growth of the students and addressing historic barriers that they face… and working toward helping them move past some of that.”

She said, “The larger community probably does not understand the depths of that work. It’s not just bringing someone in for 10 months and teaching them to weld. There is a whole other process going on here.”

McCormick said there is an increasing willingness and interest from employers to hire Indigenous workers and unlike 10 years ago, Neeginan is regularly fielding calls from potential employers about availability of workers.

McLeish agreed that such a sentiment exists.

“There is more awareness from employers that maybe they should try to hire more Indigenous workers but many don’t know how to approach it,” she said.

Places like Neeginan College are working to help employers learn just how to turn that awareness into action.