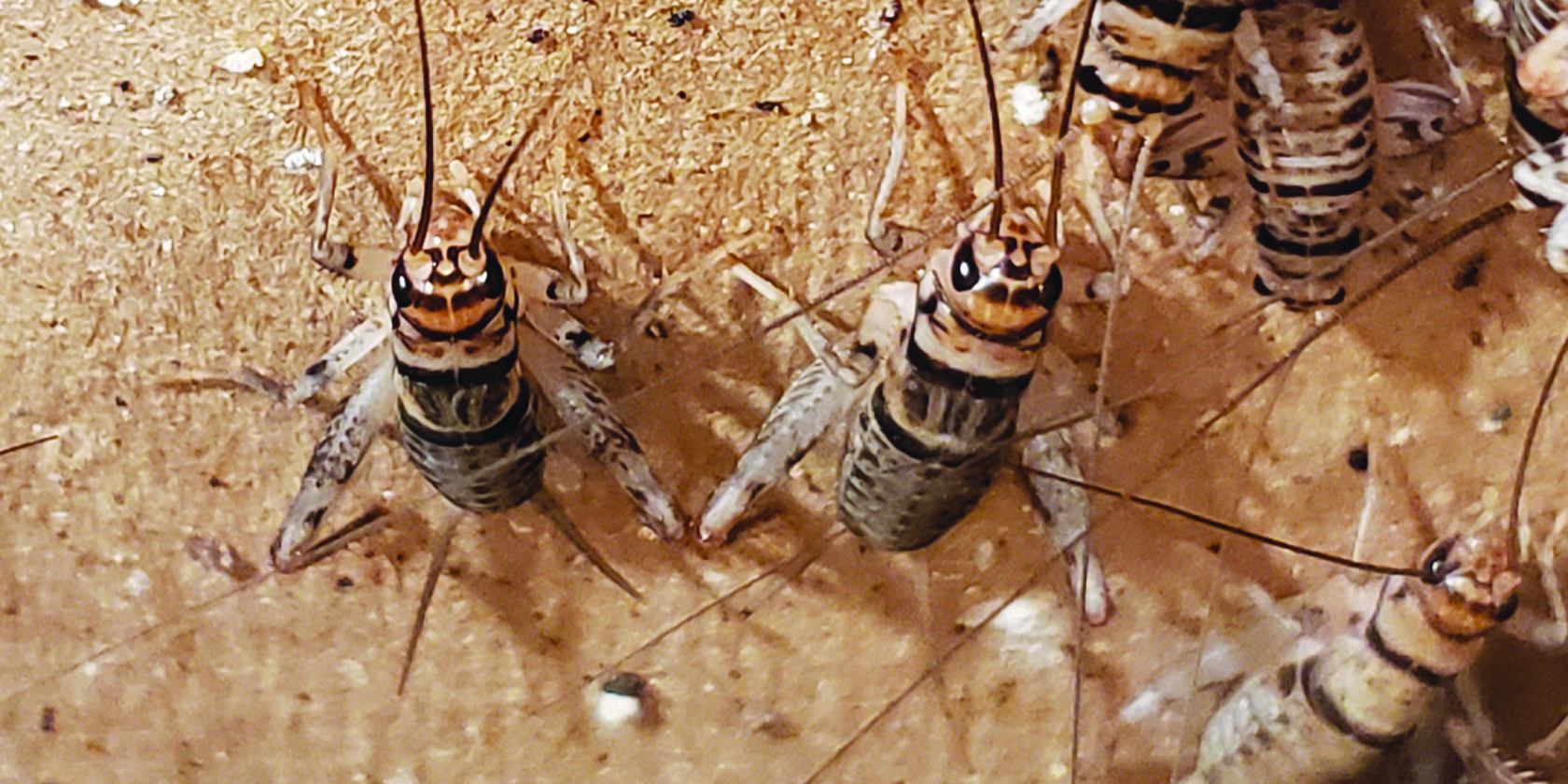 How two entrepreneurs are orchestrating a takeover of your pantry, one cricket at a time

What makes two Italians decide to start a food business in Alberta that involves ground-up crickets?

Silvia Ronzani, my business partner, and I arrived in Edmonton seven years ago to pursue our graduate studies at the University of Alberta. We both have backgrounds in environmental sciences and entomology (Ah… the first clue!).

In what can only be described as a fateful event four years ago, one of our colleagues brought in a bunch of dried grasshoppers for everyone to try during a lab meeting. That’s probably because the idea of edible insects was already floating around. We tried them, and as any Italians worth their salt would do, we graded them based on taste, texture, and potential. Did I mention we are also a couple of food nerds?

That took us down a path of discovery of what edible insects are, why they were becoming so popular, and what we could do with them.

Feed the world, save the planet

After reading a 2013 report from the Food & Agriculture Organization of the United Nations on the environmental and cultural value of edible insects as an alternative crop, we started thinking about this idea as something that could be turned into a business opportunity.

The main points driven by the report were that the world population is increasing (estimated to be 10 billion by 2050), and we need to find an environmentally sustainable and healthy source of protein within the next two decades. So, hey… why not insects? (Here’s your second clue!).

Did you say farming?

But why insects? Well, there are a few answers to the question. First of all, lower environmental impacts related to their farming. Yes, farming!

Contrary to what some people may think, edible insects are usually not “harvested” in the wild (except for few exceptions in some tropical countries), rather they’re farmed under controlled conditions. This allows us to control their diet and avoid any impact on wild insect populations.

The farming requires significantly fewer resources than any other livestock and most plant-based protein. To provide some perspective about the differences, one kilogram of crickets (the most widely farmed insects) requires about four litres of water, while one kilogram of beef can require, depending on farming protocols and other factors, up to 40,000 litres of water. That’s 10,000 times more!

Insects are also farmed in small spaces, which additionally reduces their environmental footprint by reducing land use.

A second big plus about insects is the quality of the protein. Compared to, for example, beef, farmed insects don’t require hormones, antibiotics or – no surprise here – pesticides. The resulting protein is very lean with virtually no cholesterol, and it’s high in bioavailable iron and vitamin B12. The percentage by dry weight of protein in, for example, cricket powder is 60 to 65 per cent, which means 10 grams of powder contains, at a minimum, six grams of protein. By comparison, beef has around 18 per cent protein content (1.8 grams in 10 grams of product). The amino acid composition is also of high quality, with all essential amino acids present in the protein composition.

When combining these aspects of edible insects, the food and environmental science backing up their incorporation in people’s diets, and considering our backgrounds and passions, starting work in the edible insect industry was a no brainer!

Taking the ‘scary’ out of insects

The first step in creating our company was to figure out a way to make it more palatable and less “scary” for the Canadian (and Alberta) market. Fortunately, we didn’t have to, as they say, “re-invent the wheel.”

The idea of introducing edible insects to markets and customers, other than those where insects have been a staple of people’s diets for years (i.e. tropical areas of South America, Africa, and Asia), is not completely new. Several companies in Europe, the United States and Canada have been slowly but successfully marketing edible insects. So, we researched and studied what other companies did or were doing, took into consideration what niches and alternatives we could exploit, and we tried to create something new.

The question that we asked ourselves was, ‘How can we be different from them?’

The main products that were and in large part still are available fall under three main categories: cricket powder (roasted and ground-up crickets), protein shakes, and energy bars. This is where our Italian heritage comes into play.

You’ve got to start somewhere

The first incarnation of our company started in September 2017. Camola – Sustainable Bakery drew heavily on our culinary experiences growing up in Italy: good food from simple, healthy ingredients and taste are the main goals creating a new recipe. That’s how we created our first products: baked goods that were known to customers, like our Bugscotti, a biscotti  cricket powder, that had the environmental and health benefits of edible insects.

This leads to customers’ perception. The first reactions were mixed. Although people had already heard of edible insects and cricket powder, some of them were skeptical or too intimidated to try.

It took a lot of talking and some science to convince the majority of people we met at farmers’ markets to try our products. But slowly and steadily people got on board with the idea.

A big help has come from the media. In our first year in operation, local media have been very keen to share our story, and this has helped us in spreading the word and educating consumers.

Making insects part of the everyday

One thing we found out in the first six months is that people were interested in products that went beyond simple baked goods; they wanted products to use in their everyday cooking. And, most surprising of all, they were looking for a locally farmed cricket powder! This was an absolutely unexpected and very pleasant surprise for us. It meant that people were not only embracing the idea, but they started looking at it as something they wanted in their everyday meals, and possibly farm fresh!

That knowledge of what our customers wanted kickstarted the second incarnation of our company in June 2018: Camola – Sustainable Foods. We were more focused on everyday cooking and ingredients, with a cricket farming component included!

After a bit of rebranding, new packaging graphics, and some new products, we were once again ready for our customers!

While promoting our products and working on increasing sales, we were working behind the scenes on our biggest project to date: our own cricket farm!

Like any new enterprise, we did hit some snags along the way, but after several months’ delay, we officially launched our farming operation in May 2019. And it couldn’t have happened at a better time. Even before the first batch of cricket powder was ready, orders were coming in!

What advice do we have for other entrepreneurs looking to disrupt the ordinary, whatever that might be?

Do your research! Taking a risk is great, but it’s only smart if you’ve done the work beforehand to know what you’re getting into. Going blindly into the unknown is never smart in business, especially when trying to disrupt something as basic and common as food.

And most of all, listen to your customers! The people who love and buy your products often can’t wait to share how they currently use them and how they would like to use them in the future. It’s about being open to ideas no matter where they come from.

In our vision for the future of the company, we see ourselves expanding our farming operations and our product line to satisfy the market demands and customers’ requests.

We see more and more people embracing the change. Right now we almost can’t keep up with the orders, especially for our cricket powder. Not bad for two crazy Italians trying to convince Alberta to eat crickets!

Claudio La Rocca is co-Founder of Camola Sustainable Foods. He has a background in Biology, Environmental Sciences, and Entomology, and has taken part in entomological research for the past 10 years in both Italy and Canada. He got hooked by the idea of entomophagy after eating his first grasshopper, and  hasn’t stopped trying to find a way to get everyone to enjoy edible insects.