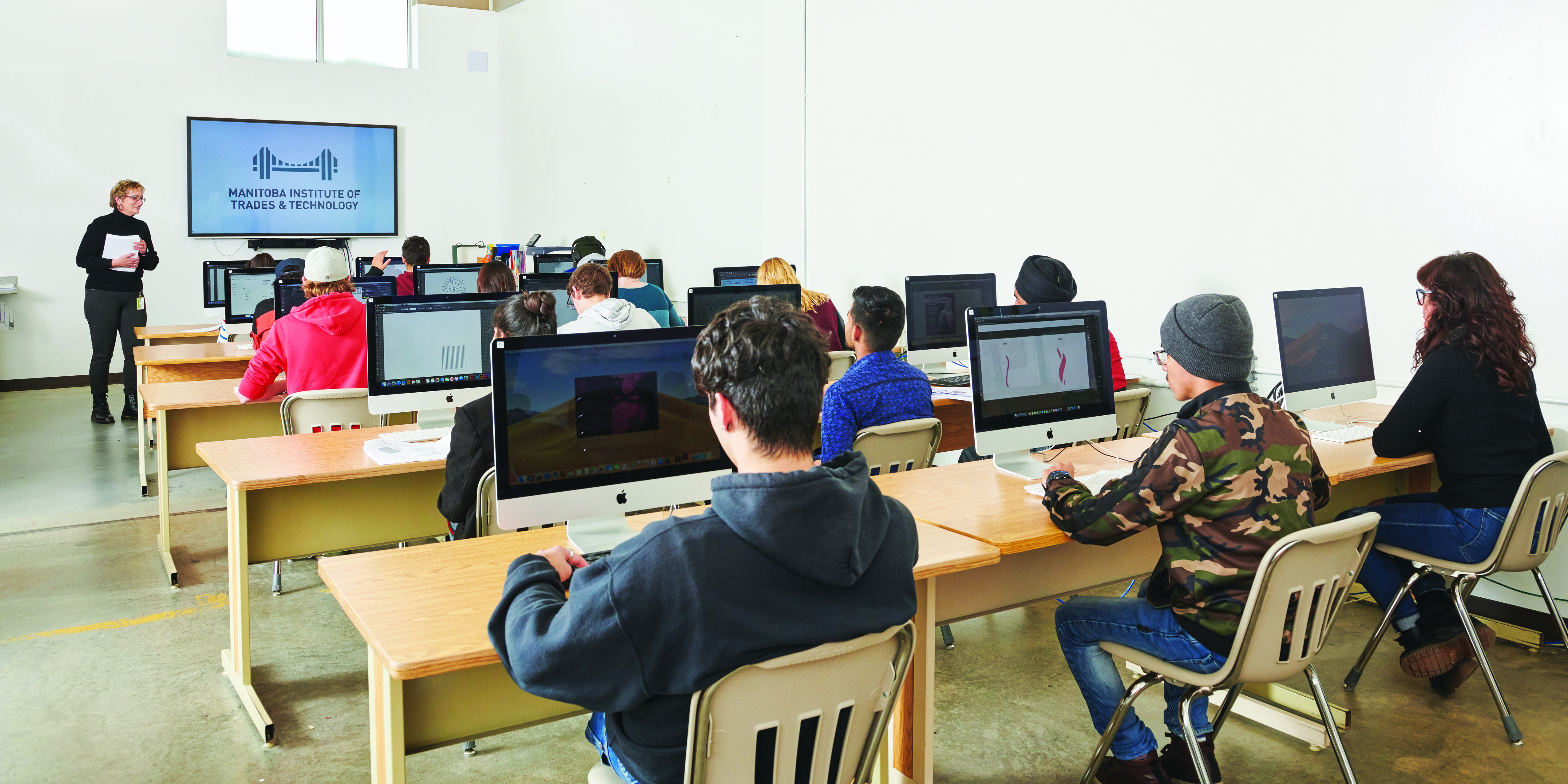 Another industrial revolution is upon us, but are our people ready?

Let’s start at the very beginning.

It was a period from about 1760 to sometime between 1820 and 1840, during which industry transitioned from hand production methods to machines, new chemical manufacturing methods, and iron production processes. Use of steam power and waterpower increased significantly, as did the development of machine tools and the rise of the mechanized factory system.

Accompanying this shift in industry came an unprecedented rise in the rate of population growth across Europe and North America.

Then, in the period from about 1850 into the 20th century, came the rise of mass production of products such as steel, chemicals, petroleum refining, and eventually the automotive industry. In this time, around the 1890s, we started to see the creation of the world’s first giant industrial corporations, including U.S. Steel, General Electric, Standard Oil, and Bayer. The Second Industrial Revolution was upon us.

Rise of the computers

Sure… you’d think with the emerging pattern that we’d be talking about the Third Industrial Revolution. Not so fast there, dear reader.

Depending on who you ask, the next revolution – the Digital Revolution – came about anywhere from the late 1950s to the late 1970s. In this shift we saw a multifaceted shift from mechanical and analogue electronic technologies to digital electronics and the rapid, widespread deployment of digital computing and communication technology during and after the latter part of the 20th century.

In this Digital Age, driven by the mass production and mass use of digital logic systems and integrated circuit chips, we’ve seen pretty much everything in our world change, including manufacturing and business techniques. It’s the computers, the micro- (and now nano-) processors, digital mobile communications, and the Internet that ushered in a period of technological and societal change that had never before been seen.

Today, we’re at yet another threshold of revolutionary change – Industry 4.0

Ask a hundred experts for the definition of Industry 4.0, and you’re sure to get at least a hundred different answers. But they’ll agree that the shift is real, and it’s happening today.

We’re in the midst of a significant transformation regarding the way we produce products thanks to the digitization of manufacturing. This transition is so notable that it is being called Industry 4.0 to represent the fourth revolution that has occurred in manufacturing. This fourth industrial revolution takes what was started in the Digital Revolution with the adoption of computers and automation and enhances it with smart and autonomous systems fuelled by data and machine learning.

As Industry 4.0 unfolds, computers are connected and communicate with one another to ultimately make decisions without human involvement. A combination of cyber-physical systems, the Internet of Things and the Internet of Systems make Industry 4.0 possible and the smart factory a reality.

As a result of the support of smart machines that keep getting smarter as they get access to more data, manufacturing will become more efficient and productive and less wasteful. Ultimately, it’s the network of these machines that are digitally connected with one another and create and share information that results in the true power of Industry 4.0.

While Industry 4.0 is still evolving and we might not have the complete picture until we look back 30 years from now, companies adopting the technologies are already seeing Industry 4.0’s potential. These same companies are also grappling with how to upskill their current workforce to take on new work responsibilities made possible by Internet 4.0 and to recruit new employees with the right skills.

It’s still about the people

The disruptions brought by Industry 4.0 are met by other large scale societal and demographic shifts such as further globalization, an aging population and increasing diversity within the workforce. There is an expectation that this period of change will be as disruptive as the original industrial revolution, if not more so.

Organizations such as the World Economic Forum, the International Labour Organisation (ILO), McKinsey, and PwC believe it will change the way we work and live, with implications for individuals, learning institutions, and the skills system as a whole.

In order to realize the full potential of Industry 4.0, the manufacturing sector and its workforce needs constantly developing skills, knowledge, and capabilities to thrive in this complex, ever-changing environment.

As go the jobs, so go the people?

Trevor Lewington, CEO of Economic Development Lethbridge and former Plant Manager and Manufacturing Director for Western Canada with PepsiCo Foods Canada says that the shift taking place in industry is not about getting rid of people.

“It’s the opposite,” says Lewington. “It’s about getting rid of the jobs in our plants and companies that suck – so much that no one wants to actually do them – or are simply too dangerous to people’s health and safety despite all the protective measures available.”

Lewington comments, “specific jobs or tasks might disappear, but there’s no need to make the people disappear. We can – and should – retrain and upskill our people so they can take on the new jobs and be able to thrive into the future.”

For Ray Karasevich, President & CEO of Winnipeg-based Manitoba Institute of Trades & Technology (MITT), the transformation of Industry 4.0 is an opportunity for the post-secondary education sector to innovate its programming, collaborate more with industry, and educate learners through lifelong connection and engagement.

“We’re continually evaluating and looking at changes to our programming to ensure we’re keeping at the front of the changes that are happening in industry,” says Karasevich.

“We constantly engage with industry to keep up on what’s shifting in the world of manufacturing, be it technology, practices, specific skills requirements, or gaps that employers might be finding in their workforce.”

When asked if it’s the education institutions or the industry employers driving the changes, Karasevich noted it’s a collaborative effort, however MITT’s industry driven ethos requires that education solutions respond directly to the needs of industry including rapid technological changes.

“We still include what we call essential employability skills in all our programs,” said Karasevich, “but the specific skills considered ‘essential’ today have changed to match the shift in industry – digital literacy, technical communications, adaptability to change, continuous and lifelong learning principles.”

“We deliver not only the technical knowledge in our programming, but also the surrounding non-technical skills and knowledge, including having industry leaders and experts come and speak to our students about what life in industry is really like,” says Karasevich. “We call these sessions our Work Skills platform.”

For Karasevich and his MITT team, ensuring the institution and its students remain at the top of their game is critical.

“We have a cutting-edge learning lab for our print and manufacturing production program, and we’ve recently announced a new centre of excellence in cybersecurity. These are just a couple examples of how we’re uniquely positioned to respond to identified needs within industry.”

Says Karasevich, “collaborating with industry is critical to our work. We want to be a training institution of choice for employers and workers across the manufacturing sector and keeping in close contact ensures we can meet their needs today and well into the future.

Skills with a side of challenge

Staying at the leading edge of education in today’s labour market is not an easy job. With the demographic shifts underway – especially in more mature industrialized economies – the aging population is going to be a significant hurdle to economic sustainability, let alone economic growth.

According to Mark Frison, President & CEO of Assiniboine Community College in Brandon, the colleges and technical institutes in provinces like Manitoba are being challenged on a number of fronts, including demographics, social, geography, and financial.

“In the Manitoba ecosystem, we’ve got eight public post-secondary institutions – including universities – and Red River College and Assiniboine, we account for essentially one-quarter of the college system. We serve the majority of students in that space, and those students are changing, Frison says.

“In the last decade, we’ve seen a trend across Canada where growing numbers of students who already hold diplomas and degrees are coming back to college for a program of study.”

Frison says Assiniboine Community College is changing its program mix to account for this shift in the student profile. “We’ve added five new advanced diplomas in business, one in geographic information systems (GIS), one in sustainable food, and another
in agriculture.”

Beyond the addition and adjustment of longer or full-length diploma or degree courses, Frison says colleges like his are meeting the needs of today’s busy employers and learners by offering micro-credential programming.

“We compress the material in a variety of ways into smaller pieces of learning that’s focused on very specific needs,” says Frison. “We need to offer the learning in a way that works for students and industry. We also need to be sure we’re not pushing credentials or courses that simply make us [the college] look bigger or more prestigious – it always has to be about the student.”

Frison says that he and his fellow college leaders face a future full of unknowns, just like businesses in every sector of the economy. But one thing he knows for sure: there needs to be a significant increase in the proportion of the total population participating in some sort of post-secondary education in order to be prepared for the job market – today and beyond.

The key to the future

So, if we’re facing a challenge of our students not being prepared for the jobs of today – let alone the jobs of tomorrow – what hope do we have?

Actually, a lot, according to Bev Stuart, Associate Vice President of Business Development and Strategic Initiatives at MITT.

“We still have so many target audiences – like Indigenous peoples, women, seniors – that we can better engage in the manufacturing workforce,” says Stuart. “There’s going to be opportunity throughout the industry for people from all backgrounds and of all abilities.”

The key to engaging with this expanded workforce, and in a way that will allow industry to take full advantage of the Industry 4.0 transition, is training.

“Industry has access to institutions like ours, but sometimes they just don’t think about us. They’ll often think about the larger colleges, like Red River, but that might not be the right pathway for them at that point in time,” says Stuart. “It’s really key to find the right training, at the right place, at the right time.”

“We’re an industry-driven institution,” says Stuart of MITT. “We have industry at the table all the time for consultations, teaching, and even providing industry exposure for our students.”

“We want to work with industry to ensure they’ve got the employees they need, with the skills they need, and at the point in time they’re needed,” says Stuart.

“It’s really quite easy for manufacturers to get started with training, be it custom, group, or whatever. They just need to call us, and we’ll work with them to find the solution that will work for them.”

Says Stuart, “it’s just about getting started, then keep on going.”