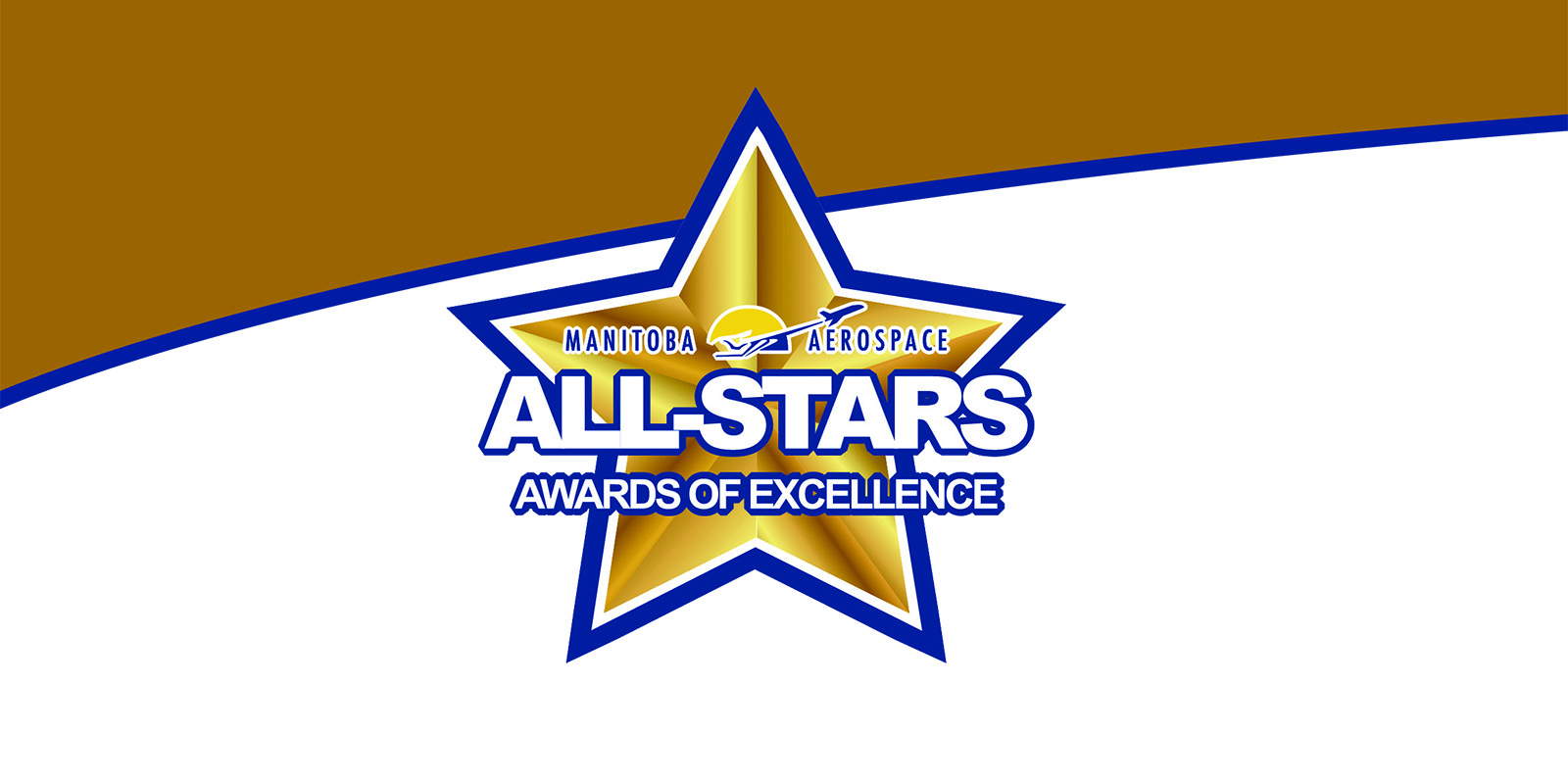 On November 28, 2019 Manitoba Aerospace held their 18th annual Aerospace All-Stars Awards of Excellence in Winnipeg, recognizing recipients for their achievements in the aerospace and defence industry.

The event recognizes partners or individuals involved in or with the aerospace industry who have demonstrated excellence in a variety of areas from leadership to business growth. Award winners are nominated by their industry peers.

“The annual All-Stars Dinner is an ideal forum for recognizing contributions to our aerospace community,” said Ron Drepaul, Chairman of the Board for Manitoba Aerospace.

Three recipients were recognized this year for their outstanding achievements:

“Through the generous support of individuals, companies, and organizations over the years, this fund has raised over $329,000 and helped 117 deserving students. Ultimately, this endowment fund is a win-win situation – more students will be able to benefit from specialized schooling, and the number of high-quality young people in the aerospace and defence industry will also increase. All of this together will only serve to strengthen our industry.”

Thank you to the sponsors

The All-Stars Dinner is made possible by the generous support of numerous industry partners and associates, including:

Manitoba’s state-of-the-art aerospace and defence industry is the largest in western Canada and is the third largest aerospace hub in Canada, producing and selling more than $2.1 billion dollars of products and services annually. Aerospace is one of the province’s premier industries and directly employs more than 5,000 Manitobans.
About Manitoba Aerospace

Manitoba Aerospace is a not-for-profit sector association that works to connect the local aerospace industry to national and international markets and also aims to develop a world-class workforce to meet industry’s needs through partnerships with Manitoba educational institutions and other key stakeholders. We support and promote the local aerospace sector through business development, innovation, research, and technology as well as human resource initiatives.

The RADARSAT Constellation Mission (RCM) bus was a complex undertaking, involving many different engineering skillsets, to develop a product that has to work when it gets into orbit. It was a multi-year, multi-discipline project that produced three satellite busses that were launched into space on June 12, 2019.

The launch was successful and all the busses are working and are providing the necessary infrastructure for the radar imaging payload to achieve performance requirements. The satellite bus requirements were amongst the most stringent in reliability and product assurance that the team has ever encountered.

There were many new technology areas where the team had to gain experience (e.g. propulsion) and, once the design was completed, the manufacture, assembly, integration, and test phase of the bus schedule was extremely challenging. Developing the RCM bus has pushed the Magellan Space System team to new and expanded capabilities. This has resulted in increased engineering experiences such that Magellan is recognized as a supplier of government and commercial operational satellite buses (as well as scientific ones). Another side benefit includes the selection of some of Magellan’s proprietary products which are being developed and/or modified for an interplanetary mission.

At the same time, the AMO needed to recruit six additional Aircraft Maintenance Engineers (AMEs) who would be deployed to service the new aircraft. All the while, the AMO was required to maintain the existing fleet of aircraft, which included: 11 King Airs, two Citation 560 Ultras, and a Pilatus PC-12 which were engaged in medevac flights and re-supply duties for other customers. In short, while undertaking this project to expand the fleet by 56 per cent over six months, the AMO needed to support the current operations over a geographic area nearly five times larger than Manitoba.

Thanks to the Fleet Expansion Project Team at Keewatin Air and their excellence in teamwork, project management and execution of the fleet integration plan, the AMO was able to fully meet and exceed the goals of the project. As a result, Keewatin Air has delivered on its commitments. Keewatin Air has built a solid, trustworthy, and collaborative relationship with its new customer, while ensuring agreements with existing customers were fully met, without a lapse in service. The planning and execution of the Keewatin Air King Air fleet expansion serves as a benchmark example of fleet integration excellence for the industry at large.

Carolyn Geddert joined the Faculty as an Engineer-in-Residence and then became the Director of the Co-op/IIP program in 2011 when there were 116 Co-op work placements. Since then, Carolyn and her team have significantly redesigned the Co-op program to be more responsive and flexible to the needs of both students and employers. The result is that in 2018, the Co-op/IIP program placed 536 students into work placements with 162 employers. This growth not only provides students with an outstanding educational experience that helps to better prepare them for engineering positions after graduation, but also provides critical skills to a wide range of employers in Manitoba and beyond.

Carolyn has been the driving force behind the growth in the Co-op/IIP. Starting as a one-person operation in 2011, she has since brought a team of five on board to support the Co-op/IIP program. Carolyn is a tenacious and tireless advocate on behalf of the Co-op program and of Manitoba Aerospace as a community. She is a contributing member of the Aerospace Engineering Liaison Group, and she epitomizes excellence and is deserving of recognition from our industry as an individual who has truly “evoked a change in the practice or success of an enterprise.”

Her impact can be measured by the many successful Co-op placements that take place in our industry.