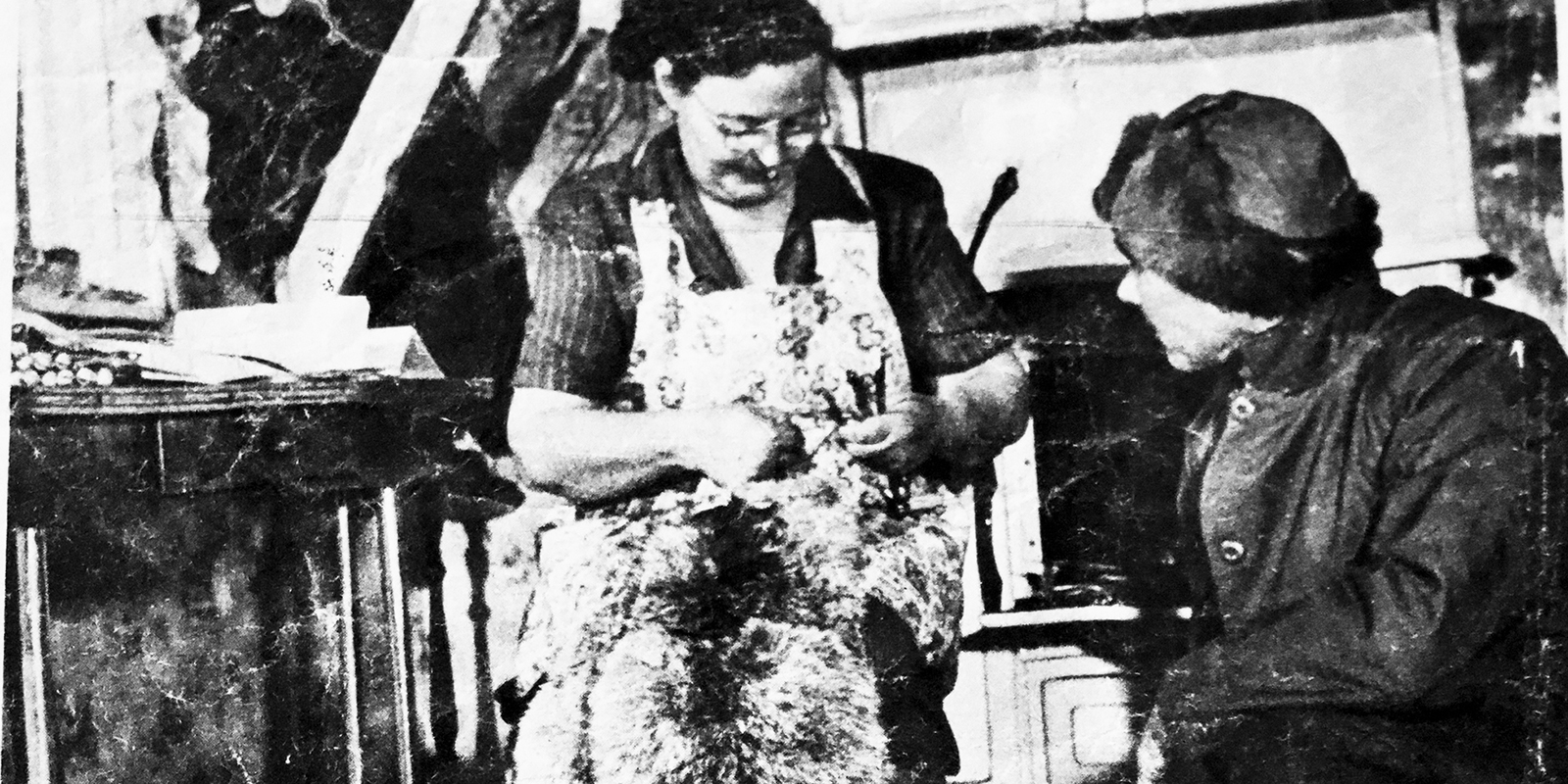 I first became involved in manufacturing 30 years ago. It wasn’t something I planned to do, but once I started, I was hooked. Every day was different. I had the opportunity to setup processes, and try my hand in a variety of areas, from purchasing and scheduling to sales and operations. Each added responsibility came with greater personal and professional accountability. There were no lessons more valuable than those earned by doing.

I was fortunate to have an employer that generally supported me in my role; and I was consequently very comfortable being the only woman in the room during meetings. That said, I also enjoyed the camaraderie on those seemingly rare occasions when I crossed paths with other females in the same industry. I remember meeting up to swap stories after-hours and share insights on how to progress in a predominantly male environment.

There is no denying that manufacturing has provided me with a lucrative career and endless opportunity for growth. As with any sector, it has presented its challenges, absolutely — but none that, to me, fully explain why the manufacturing workforce has not been able to attract more women.

Especially here in Western Canada. Prairie women have been pioneers in their own right for more than a century. In 1916, women in Manitoba were the first in the country to gain the right to vote in provincial elections, followed later the same year by Saskatchewan and Alberta. That was five full years before women could vote and run for office in a federal election, and 13 years before women were formally recognized as persons under the law. Tales of Louise McKinney, Emily Murphy, Irene Parlby, Nellie McClung, and Henrietta Edwards all provide inspiration and are indicative of that unique and determined spirit.

My own inspiration comes from another Prairie woman who persevered to provide for her young family. My grandmother, Gertrude Calcutt, was widowed in the early 1930s. She had three young children, lived out on the farm in the Roblin, Manitoba, area, and did what she could to make ends meet.  She took in laundry, ironed, and often cleaned houses.

Though, she didn’t stop there. My grandmother started to look at ways she could use her domestic skills to improve the lives of herself and her family. So, she established a store in the small mining community of Herb Lake in Northern Manitoba. Her store not only served as a depot for the trappers to have pelts tagged and shipped south, it was also a supply centre providing basic necessities. To differentiate her store from others in the area, she would rise early every morning to bake bread. She stocked her store with handmade candles and knitted items as well.

She would have never identified herself as a manufacturer per se; but, in the very rudimentary definition of the word, she was one — processing raw materials to create new, value-added products. I am certain it was not an easy life, but she met each day with a commitment to make it better than the last.

Manufacturing needs to attract women — like my grandma — who are entrepreneurial and innovative, who can see past the barriers and who want to seize the opportunity for a rewarding career.

The sector truly depends on it. To overcome the hurdles of tomorrow, we need to embrace diversity and inclusivity as the engine of better ideas and more resilient companies. A rapidly aging labour pool means jobs are already going vacant. Women must be part of the solution.

Yet, only 28 per cent of manufacturing jobs in Canada are occupied by female employees — 20 percentage points lower than the national average for all industries. How do we change this statistic?  How do we attract more women into manufacturing?

Through extensive consultation and a nationwide survey, Canadian Manufacturers & Exporters produced a summary paper entitled Untapped Potential: Attracting and Engaging Women in Canadian Manufacturing, which concluded, “Women need to see other women succeed. In the same way that Olympic champions inspire children and young adults to work hard and achieve their goals, female leaders in manufacturing inspire other women to follow in their footsteps.” Nearly 37 per cent of all respondents in the study said that one of the most effective ways to buck the trend is for businesses to have more visible female role models. Women under 35 were considerably more likely to say that female role models would help attract more girls into manufacturing professions.

In response to this finding, the Women in Manufacturing (WIM) initiative is launching HERstory — a new initiative to spotlight some of the sector’s most inspiring female leaders. Join me in sharing these stories. For some, doing so may be a business imperative. And for others (myself included), there is perhaps a greater sense of responsibility.

Together, we can help change minds and make a real difference.

Carrie Schroeder is the director of operations for Canadian Manufacturers & Exporters (CME) in Manitoba, and is one of the driving forces behind CME’s Women in Manufacturing initiative. To learn more, visit www.womeninmanufacturing.ca.

Heidi Reimer-Epp was a student working a marketing job at Standard Aero when she first fell in love with manufacturing.

“I loved walking through the plant and seeing the engines hanging there, waiting for repair, and the different things happening to them,” she recalls. “Growing up, I’d always been a person that loved doing things with my hands.”

Reimer-Epp returned to her program at the Asper School of Business at the University of Manitoba in search of courses related to manufacturing, only to be told that the manufacturing course she was interested in hadn’t been offered in years. That was around 1993.

Fast-forward 25 years, Reimer-Epp is now one of the successful founders Botanical PaperWorks in Winnipeg — an innovative stationery company that integrates herb, vegetable, and wildflower seeds into various types of ‘plantable paper,’ from product packaging to wedding invitations.

Getting to this point in her career, however, has not been a linear path.

After university, Reimer-Epp took a marketing job for a company that manufactured plasma blood products. She says that even though she was relegated to the office, she would often don the sanitary medical gloves and booties to visit the area where the blood was being made.

Around the same time, Reimer-Epp’s mother, Mary Reimer, was working as an elementary school teacher. Reimer was having trouble finding something to do with her students that wouldn’t waste a lot of paper. Students would often grab a sheet and scribble once on it before throwing it in the trash.

Then, one day, Reimer had an epiphany.

“She came up with this idea to teach the kids how to do hand paper-making from the waste paper,” says Reimer-Epp. “They would bind that paper into a book and write stories on it and would have a little keepsake.”

When Reimer-Epp got married, her mother also made the wedding programs.

The inkling to get into the paper business was ‘planted’ (excuse the pun) then and there. Reimer-Epp says she and her mother would go back and forth for years about whether they would take the plunge together and start a company.

“At a certain point, we figured we just need to give this a try,” says Reimer-Epp. “I said, ‘I’m going to quit my job.’ I was young enough that if it was a total failure, I could’ve found another job. But I’d always regret not trying.”

And so Botanical PaperWorks was born. The early years were a challenge as Reimer-Epp and her mother self-developed the manufacturing processes. Reimer-Epp would often keep a copy of Fast Company, an American business magazine, with her to keep up with industry trends. When the tech crash happened in the early 2000s, Reimer-Epp pulled out her copy of Fast Company and saw a surprise on the cover.

“I remember getting my copy and on the cover was Boeing,” says Reimer-Epp. “I felt so excited because I thought, ‘manufacturing is back.’”

The idea for seed paper — the foundation of the company today — came not too long after.

“We were working on the plant chapter of one of our books, working with different parts of the flower, and we thought ‘why not put in some seeds?’” says Reimer-Epp. “We knew we had something pretty unique, but it took us three years to commercialize it so we could manufacture it on a large-scale basis.”

Reimer-Epp partly credits her and her mother’s complimentary skills for the success of Botanical PaperWorks in those formative years.

“She was really good at saying to me, ‘Heidi, this is your thing.’” remembers Reimer-Epp. “We have a really good relationship, and we were able to morph that from a mother-daughter relationship into business partners.”

Today, Reimer-Epp has been running Botanical PaperWorks for more than 20 years. Being considered a ‘woman in manufacturing’ is something that Reimer-Epp admits she doesn’t put too much thought into, but she still sees the value in sharing her experiences.

“I find there are opportunities to share those stories and there is an appetite for people to hear them,” says Reimer-Epp. “We have avenues and a responsibility to encourage other businesspeople — often women — to pursue similar paths.”

Be a part of the Women in Manufacturing initiative by celebrating the important role women play in advancing the industry, and by championing inclusion and diversity in your own workplace.

Prairie Manufacturer Magazine is committed to doing its part. In each of the next three issues, you will find a featured column or article shining a spotlight on that very topic:

Summer 2019: Workplace culture: Is your team as welcoming as you think?

Winter 2019: Harnessing the power of influencers

To learn more, or to become involved, contact
info@prairiemanufacturer.ca.